In two previous posts, I put a spotlight on a new member of the Red Pen list, Peter XZ. You can read the specifics in those two earlier blog entries, but here's a summary of his crimes:

As you can see, these are serious charges. Peter does not dispute any of the charges, either. He confessed to the petitioning, AFK mining, and Code ignorance, and I witnessed his other crimes. But he begged for a second chance. He claims he was not aware of the rule against petitioning (though such ignorance is itself a violation of the Code).

However, I am taking the extraordinary step of allowing Peter's fate to be put to a shareholder vote. Will he remain on the Red Pen list? If you own shares in the New Order, it's up to you. Here is the text of Peter's EVEmail appeal: 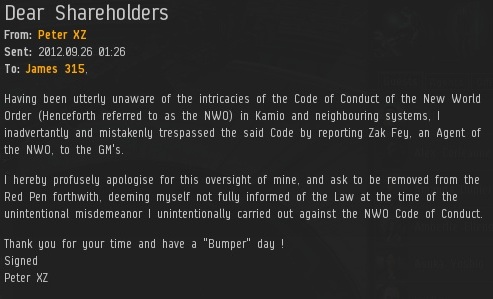 As with other shareholder votes, you may continue to purchase shares at this time, but the vote will be based on the shares held as of this post.

You may cast your vote based on whatever criteria you wish.

Shall Peter XZ be removed from the Red Pen list?

You may vote either by replying in the vote thread on EVE-O. You may also vote by sending me an EVEmail, as I am aware some of my shareholders have been banned from the forum.

Normally I send an EVEmail to all shareholders notifying them of a vote, but in this case, since it does not involve important shareholder business, I will refrain. Instead, I will compensate by having a longer voting period than normal.