You've heard of Orcas, but have you heard of their wretched little cousin, the Porpoise? 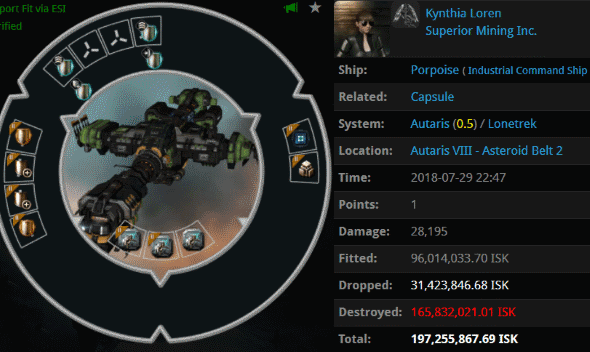 Don't worry about the details--Porpoises go boom like any other mining ship.

Kynthia Loren lost her Porpoise when a fleet of Code enforcers dropped a pile of Catalysts on her. Yet she didn't seem to mind.

Our Agents weren't buying it. They'd seen plenty of miners who try to feign indifference while seething on the inside.

Even so, Kynthia gave off a strange aura of detachment. But why?

The miner's comments suggested that she had either become a nihilist or a fatalist, or both.

Typically, a mining ship is a carebear's most prized possession. Kynthia, on the other hand, made it sound like she didn't even like having a Porpoise--like she was glad she'd been ganked.

Our Agents harbored doubts about the miner's attitude. She was irrational, not merely apathetic. 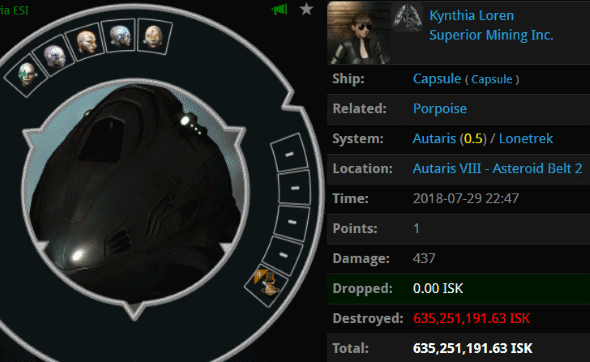 The gankers had taken Kynthia's pod, too. She had a set of learning implants--and that little bauble on the bottom right, a Mining Foreman Mindlink.

Kynthia expressed total disinterest in the implants she'd lost. There was something off about this miner.

To the gankers' amazement, Kynthia declared that she'd intended to lose her stuff from the very beginning. It was all part of her plan.

Kynthia was among the most nihilistic miners that our Agents had ever come across. Could they find a way to make her feel something--anything? And could they get a permit sale from such a strange miner?