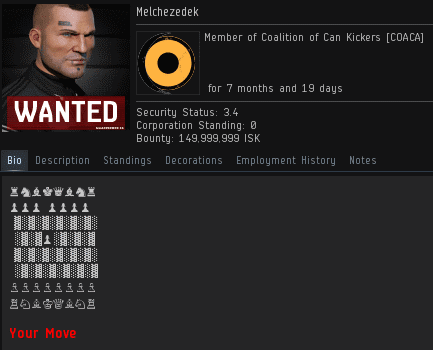 Meet Melchezedek. In addition to being a world-class chess player, he's a master strategist in the game of EVE.

Just kidding. Melchezedek is the guy who left one of these in the cargo bay of his Hulk. His 1.1 billion isk loss was featured on the most recent Kills of the Week post.

Needless to say, Melchezedek is not actually a master strategist. And if he plays chess at all, I'm guessing he's really bad at it. 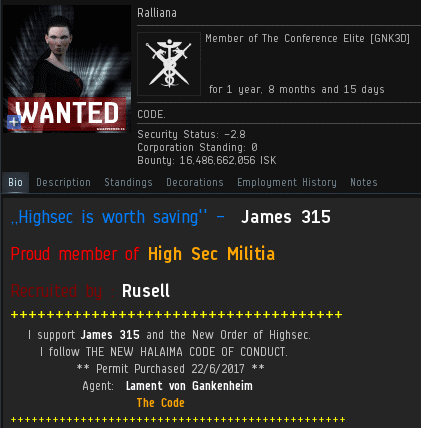 Melchezedek made a grave miscalculation. We know that PLEX and skill injectors tend to encourage carebears to make poor decisions, but rarely are their mistakes so costly as this miner's. Melchezedek kept buying PLEX until he ran out of isk, then liquidated his skill points and ran out of those, as well.

With no money or skill points, Melchezedek was forced to start at square one. What about all of his knowledge and experience, you ask? It consisted of AFK mining in highsec. Not much of a climb up the EVE learning cliff.

Of course, you don't need skill points to invoke the "gankers reduce CCP's subscription revenues" myth. We see new players popping off with that one all the time. They must be teaching that nonsense in the EVE tutorial.

Ralliana offered the miner something far more valuable than isk or skill points: the Code. Melchezedek didn't see the use in it, but it would've saved him.

The New Order attracts the most compassionate people in the game. Agent Ralliana was so sensitive to Melchezedek's plight that she didn't mock him for keeping the skill injector in his Hulk in the first place.

Ralliana gently linked the name of the Saviour of Highsec. Instant tears. Melchezedek was a Goofus!

The miner informed our Agent that he would no longer be able to make his extraordinary contributions to the EVE community. But I believe we'll somehow find a way to survive without him. Ours is a resilient community.

Because, after all, the EVE community is powered by the Code.
Posted by MinerBumping at 18:18