The carebears of highsec have a lot of problems. Two of the biggest: Overconfidence, and a lack of confidence. Confused? Read on.

By now, we're all familiar with the loudmouth, braggart miner who claims to have powerful friends in nullsec, or possibly an elite PvP main character.

One such miner demanded Agent Bing Bangboom fight him in Deklein. Curiously, the miner wasn't ganked himself; Skvatman merely witnessed a nearby miner being ganked and got triggered.

When miners start behaving like they're entitled, our Agents remain courteous, professional--and assert their authority. The New Order is always in charge.

Nevertheless, people who have done nothing in EVE other than AFK mine in highsec will still try to puff up their egos with big talk.

So many highsec miners are in desperate need of humility. They need it far more than they need ore, ice, or isk. 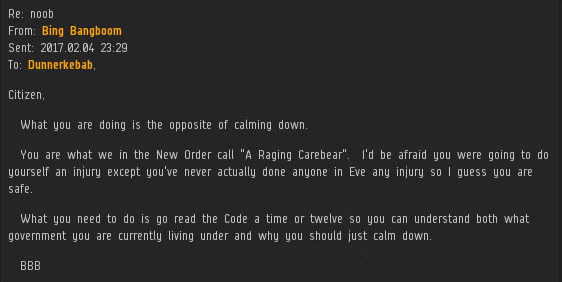 As we've seen, overconfidence--the same character flaw that contributes to miners slinking around highsec without a permit--is a big problem.

...But so is underconfidence. So many miners absorb one gank and become completely helpless.

Although ganking has been scientifically proven to increase retention rates overall, some miners feel utterly defeated by the loss of a single ship.

The underconfident miner no longer believes in his own ability to succeed in EVE. These miners are incredibly lucky that our Agents usually stick around to help them after a gank.

Nevertheless, newly Retriever-less miners can feel so worthless that they don't even have the strength of mind to read the Code. Think about that. The sluggards can't even read!

"If I can't AFK mine in total safety, I may as well crawl into a hole and hibernate." Sometimes I wonder if these miners have anyone in their life who cares about them--aside from our Agents.

New Order Agents are advised to exercise extreme caution when dealing with depressed miners: They may be putting on an act to extract sympathy isk. Stay on your guard!

(Protip: All human civilizations in world history involve people "making claims on shit and using lethal force to enforce it.") 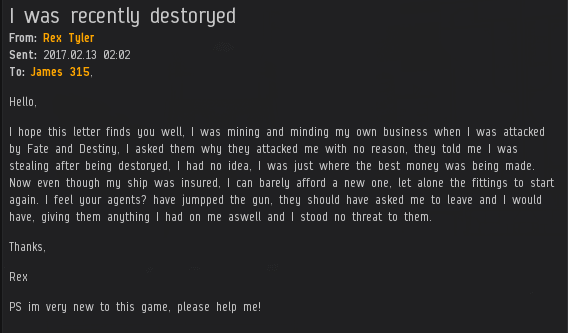 The underconfident miners are lucky, because when they seek help, they always get it. They get it in the form of the Code. (Now available in six languages!)
Posted by MinerBumping at 18:51 46 comments: 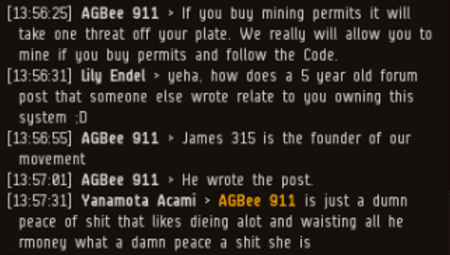 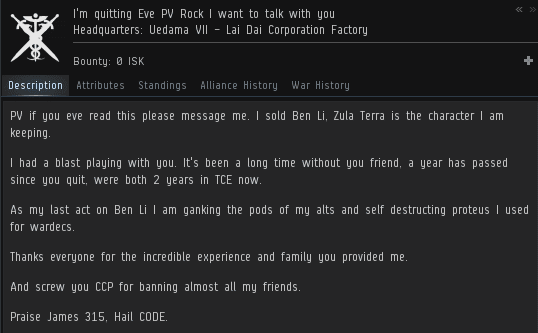 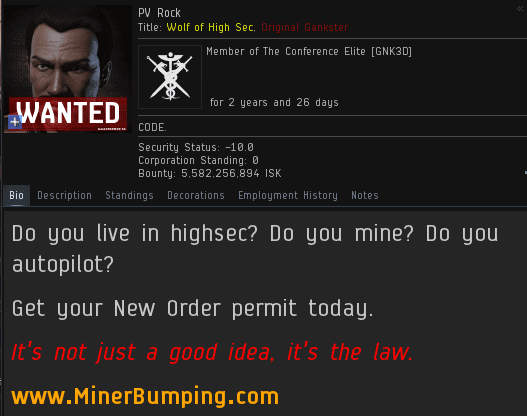 Needless to say, I'm quitting Eve PV Rock I want to talk with you's purchase is historic. Later, we'll run the numbers on all the hat-tipping that will need to be done as a result of this. In the meantime, I merely wanted to put all of the New Order's enemies at ease. You have nothing to fear. If you obey the Code, of course.
Posted by MinerBumping at 18:00 139 comments: 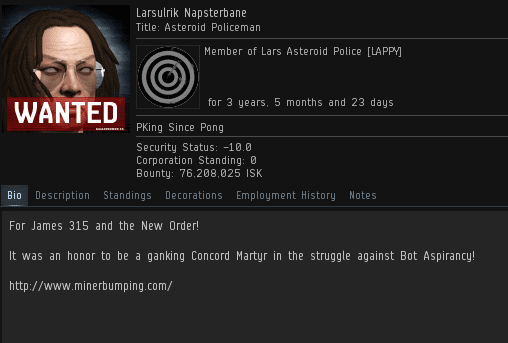 The miner remains in a state of darkness. Never fear, dear reader: Our Agents are always ready to rescue a miner, whenever an opportunity presents itself.
Posted by MinerBumping at 00:05 196 comments:

It's exciting--this week saw another round of extraordinary victories for the New Order. Judging by the destruction of so many bot-aspirants, it should be clear to even the bitterest rebel that the Code is the only way to go. From the week of August 20th @ 00:00 EVEtime through August 26th @ 23:59 EVEtime: 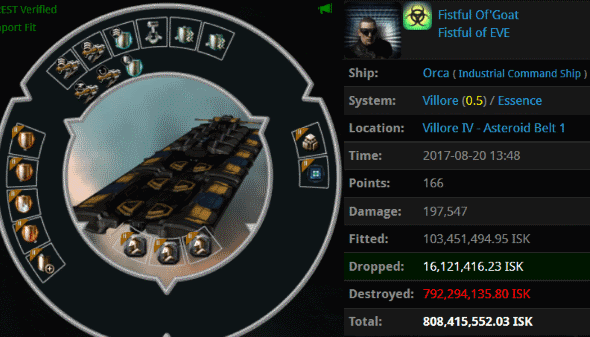 KILLMAIL
Undoubtedly nervous about the dangers of being in highsec without a permit, Fistful Of'Goat tanked up his Orca within an inch of its life. He must've been confident that only a massive fleet of Agents could take him down. However...

All it took was one. Agent The BigLabowski happened to be a new member of Fistful's own corporation. What luck!

As we saw in yesterday's MinerBumping post, a respectful "gf" in local is the first step toward recovery. 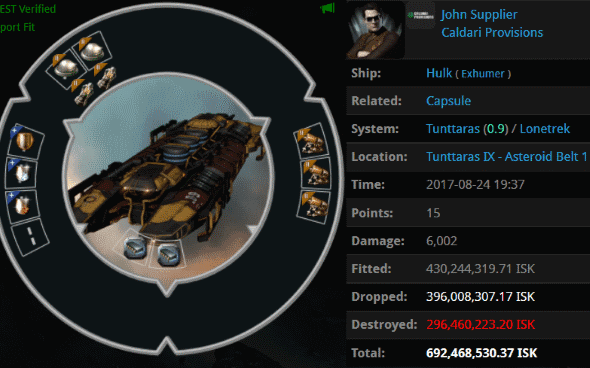 KILLMAIL
John Supplier huddled up with his blingy Hulk in a 0.9 security system, quietly chewing on the rocks. He didn't get away with his crimes for long; Agents Comedian II and samloopy were on the case. 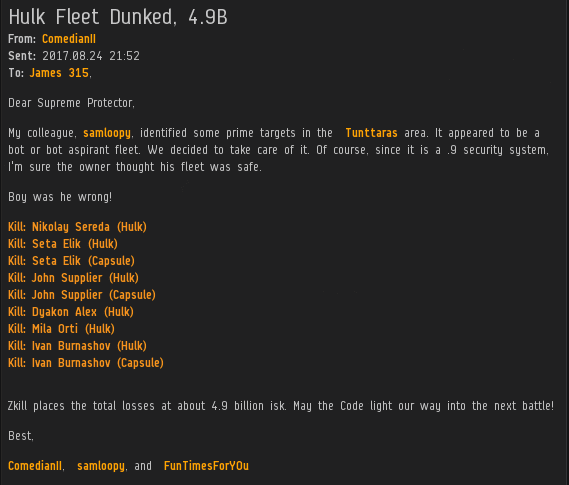 Rascals Brigade corporation was investigating a rumored bot fleet operating out of 0.9 that contained multiple blingy Hulks. Our heroes grabbed a bunch of Tornadoes and blapped the bots one after another. 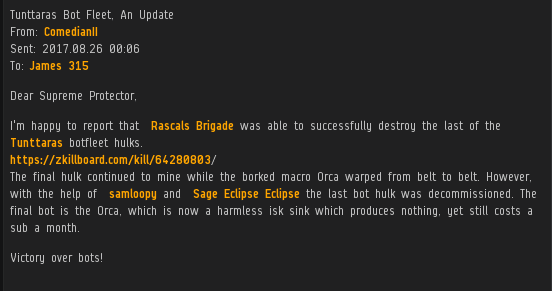 In all, over 5 billion isk worth of botting equipment was destroyed. The Agents' suspicions about illegal botting were confirmed by the behavior of the surviving Orca. The New Order remains EVE's best protection against bots. 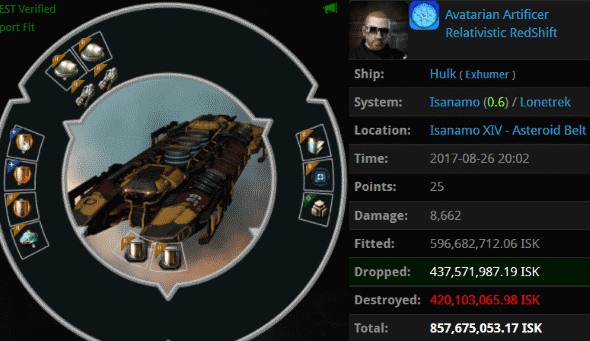 KILLMAIL
From bots to bling: An even more expensive Hulk was piloted by Avatarian Artificer. He was caught in the act by Agents Crom Cimmeria and Subotai Hyrkanian. Amusingly, Avatarian tried to tank his Hulk with a blingy ORE bulkhead module. Talk about missing the point! The criminal also had a quarter billion isk worth of blingy mining drones. What a Goofus. 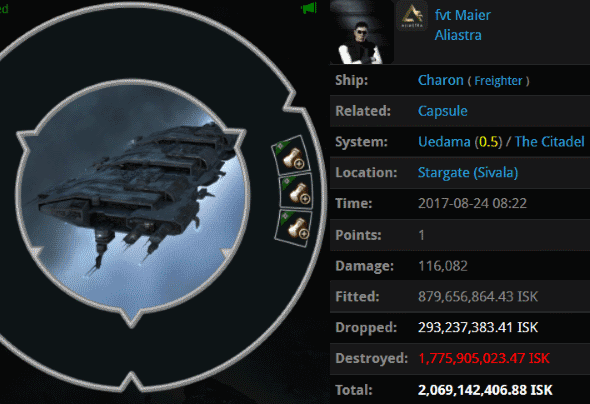 That explains the blingy cargo expanders: He needed plenty of extra space for his cargo, which consisted of a single shuttle. 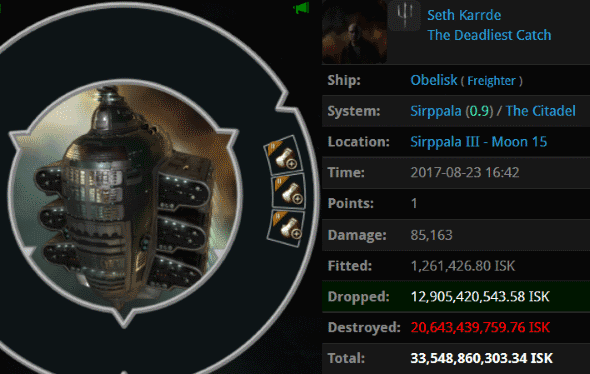 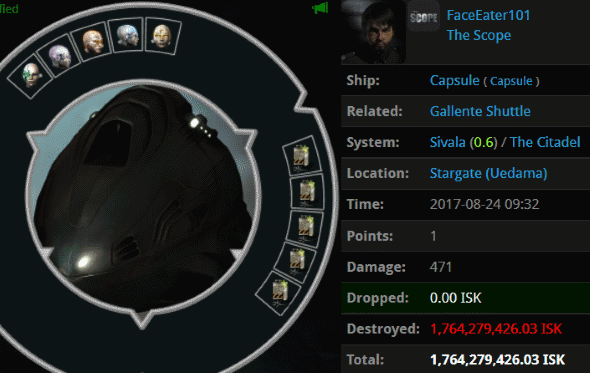 KILLMAIL
FaceEater101, too, would've been amused by the idea of a freighter carrying a shuttle. To move a shuttle, why not simply pilot the shuttle itself? Not so fast. Our Agents are constantly on patrol for autopiloting shuttles. Agent Lisa Tancos detected the bot-aspirant and moved in for the kill. 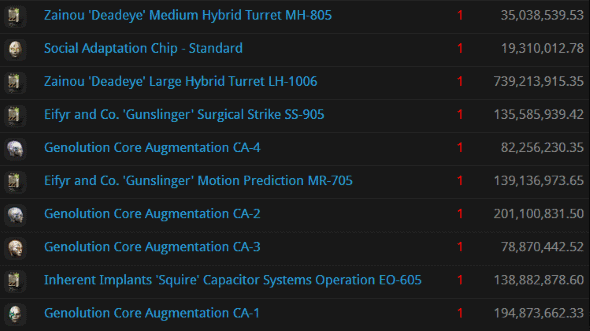 Upon removing the shuttle, our Agent sunk her teeth into a juicy pod with 1.7 billion isk worth of implants. Intriguingly, the carebear's implants were focused on improving his gunnery skills. A future mutterer of the "ships that can't shoot back" meme, no doubt.
Posted by MinerBumping at 18:44 17 comments: