The Genesis of Compliance, Part 7

Previously, on MinerBumping... At the very moment Agent Alt 00 was about to give valuable intel to William Rageclaw, William's friend billslowski002 Shikkoken threw a wrench into the works. By falsely accusing Alt 00 of extortion, billslowski002 triggered a total diplomatic meltdown.

William's decision to side with billslowski002 made it even more unlikely that his deal with Alt 00 could be salvaged.

billslowski002 proved to be the most irresponsible party in the room. He had nothing at stake in the deal; it was William who wanted the intel, after all.

Colinde's, a member of William's alliance, happened upon the scene. He was utterly confused by what was unfolding in the channel.

William finally played his trump card--the ability to control his in-game channel by muting people. He was no longer confident that he could strike a bargain with Alt 00, but maybe Agent Lewak would do in a pinch? If Alt 00 didn't have a monopoly on the intel, that is.

Now everything depended upon Lewak.

Without warning, a new player joined the channel: Overmind Niminen, the notorious on-again, off-again Agent. Needless to say, he was not helpful to William.

Indeed, Overmind's innocent remarks irritated William further still. Was there no one who could offer him assistance?

Next in the parade of Agents to join William's channel was Alt 0. She had an air of authority about her. 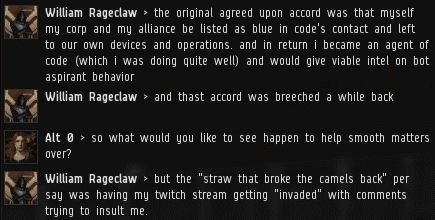 William took a moment to air his grievances with the mighty CODE. alliance. If they valued his support, it was time to address these issues. 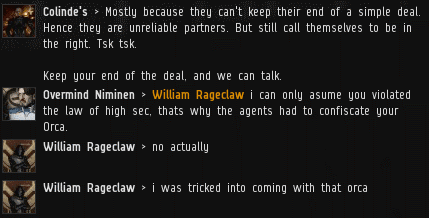 William's historical narrative could be challenged, but one thing was certain: He had been caught using an Orca. And that put him under a cloud suspicion.

Overmind continued to gather facts about the situation, but nothing he'd gleaned thus far tended to establish William's innocence.

When all hope seemed lost, Alt 0 got everyone's attention and prepared to make an important announcement. All would be revealed soon enough.

The Genesis of Compliance, Part 6

Previously, on MinerBumping... William Rageclaw lost his Orca. But more importantly, he lost his voice. After being muted in the MinerBumping channel, William sought the identity of the operator who had silenced him. Agent Alt 00 had the information and was willing to sell it.

William's curiosity could not be denied. He decided to purchase Alt 00's intel for 63 million isk.

Alt 00 made her final preparations to join William's TeamSpeak server and deliver the information. There remained one loose end to tie up, though.

Earlier, a stranger in William's in-game channel had accused our Agent of extortion. That issue needed to be resolved before things could move forward on the intel front.

The stranger maintained his silence. Alt 00 made it clear that he would need to speak up. This was no time for games.

At last, billslowski002 Shikkoken chimed in. But it did not appear that he was in a cooperative mood.

billslowski002's accusation of extortion was absurd and outrageous. Naturally, he was instructed to pay up or else.

William could have smoothed things over by siding with Alt 00. After all, she had vital intel. But William went in the other direction.

The deal, having been so close to consummation, was now in jeopardy. It was a major setback for William. 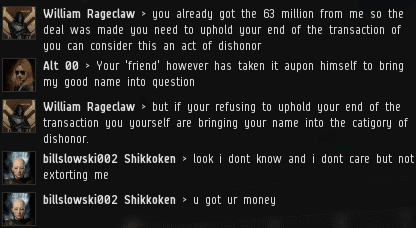 Thanks to billslowski002's ill-considered comments, the situation now had all the makings of a diplomatic brouhaha.

William and Alt 00 each viewed the other as holding the key to a happy resolution. Who would budge first? 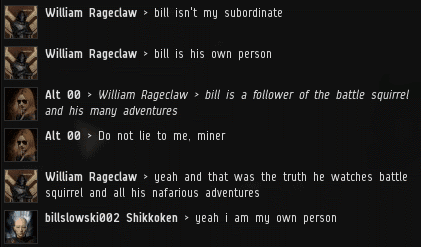 ...Or would neither side give an inch--thereby risking a catastrophe? 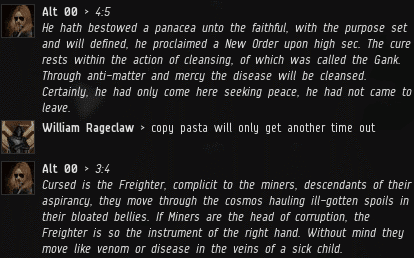 Previously, on MinerBumping... 'Twas back to business as usual for aiva naali and his secret team of galaxy-ruling master strategists. Pandemic Horde's days were numbered.

With a little help, aiva came to understand that applying to join one of Goonswarm Federation's member corps was futile. After all, low-level recruitment officers didn't have sufficient clearance to learn about aiva and everything he'd done for the Imperium. 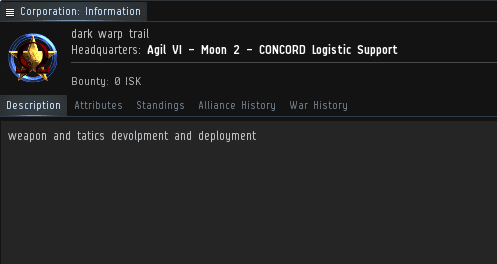 aiva's solution was to create a corporation of his own; the corp would then apply to join the alliance. 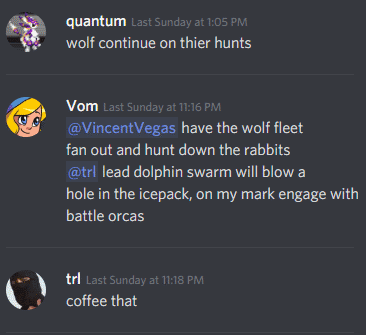 While aiva waited for his corp to be accepted into Goonswarm, his team would continue to fight the good fight.

aiva commanded his forces remotely, as he was accustomed to doing. But he looked forward to the day that he could watch the battles from the helm of his flagship. He'd even have a flag to go with it. 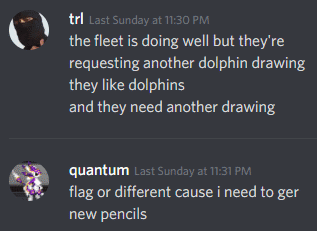 Regardless, aiva was the indispensable man. There were plenty of other talented people in the Imperium, but only aiva was skilled at so many different things. 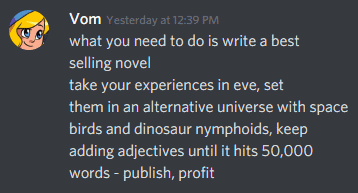 Anyone for a Kickstarter?

From time to time, aiva continued to make contributions to his titan fund. The sooner his flagship was complete, the better--for everyone except Pandemic Horde, that is.

Though he still had ambitions for titan ownership, aiva's priorities changed. He now craved a Nyx above all else. One way or another, he kept the Imperium shipbuilders busy. 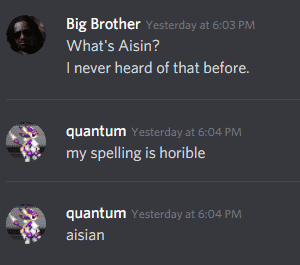 Time passed. Pandemic Horde was not yet defeated, but aiva was working on that. 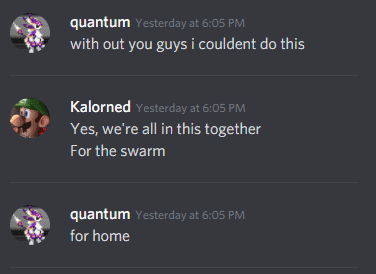 Even a super-genius needs to be surrounded by a competent group of people who can carry out his orders. Luckily, aiva had the best team the Imperium had to offer. 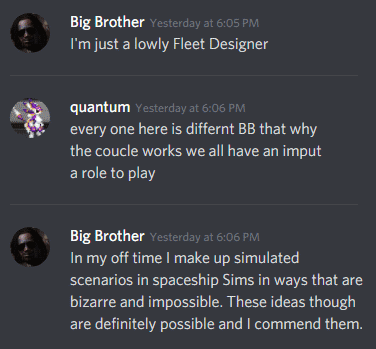 Despite the diversity of talents represented by aiva's "coucle" (council?), everyone had the ability to grow and learn from each other. aiva's colleagues often picked his brain with probing questions: 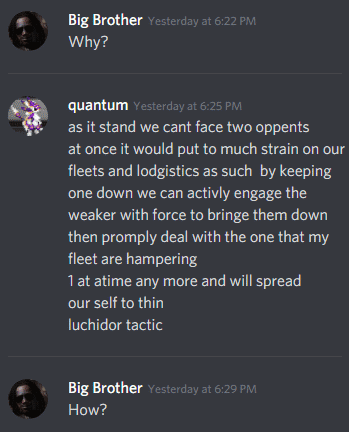 ...And aiva was always happy to answer them. 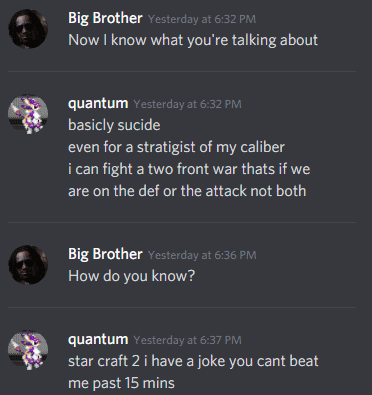 For any EVE player with a serious interest in nullsec, being in aiva's coucle/council was a dream job. It seemed as though nothing could ruin their happiness. Then again, in the world of EVE Online, anything can happen.