We all know that using a Venture for highsec mining is a strong indicator of bot-aspirancy. The same certainly applies to using a mining frigate for the gathering of highsec ice. 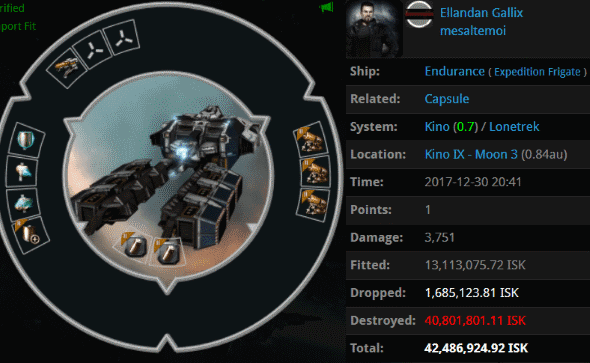 Ellandan Gallix was caught mining ice in a fail-fit Endurance--in Kino of all places! After their round of elite PvP concluded, Agent Lawrence Lawton received a convo request from the miner. An apology, perhaps?

Ellandan immediately protested his innocence, claiming to be a permit-carrying miner. These can be some of the toughest convos to deal with.

Lawrence tried to explain himself, but Ellandan was a bit too huffy to listen.

The rebels cynically claim that a New Order permit means nothing. Actually, our Agents take the permits very, very seriously. Agent Lawrence was eager to straighten things out.

Specifically, Lawrence wanted to straighten the miner out. And while he was at it, he collected evidence of the miner's true nature.

There's a big difference between a Gallant miner and a Goofus who thinks he bought a "get out of jail free" card for 10 million isk. The latter loses his ship and behaves disrespectfully to his superiors, the Agents of the New Order. Ellandan didn't waste any time in proving himself to be a Goofus.

Within seconds of the convo closing, Ellandan made good on his threat to file a petition with the Saviour of Highsec. Ellandan got super lucky. No, he didn't get reimbursed; he got his mail answered in Highsec Miner Grab Bag #148.

As you might recall from said Grab Bag, Ellandan sent Lawrence more evidence of his bad faith. He never intended to be a Code-compliant miner. Not with that attitude.

And as for his reaction to the Grab Bag? 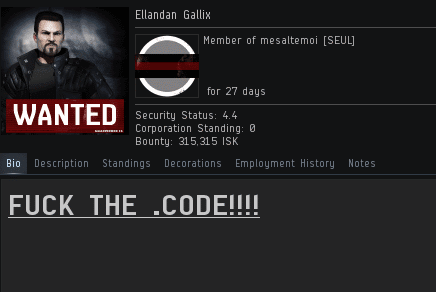 The miner decided to burn more bridges. Actions speak louder than isk: He may have purchased a mining permit, but Ellandan simply wasn't ready to join the New Order family. Highsec is thankful that Agent Lawrence exposed the truth about this miner.
Posted by MinerBumping at 18:29