The Orcas of Nakugard, Part 5

Previously, on MinerBumping... The Nakugard system was rocked by a series of Orca explosions, courtesy of Agent Alt 00. Our heroine's gank fleet was able to chase a Russian mining corporation out of the system, but the local bots proved to be more stubborn. How many would need to die before they got the message? 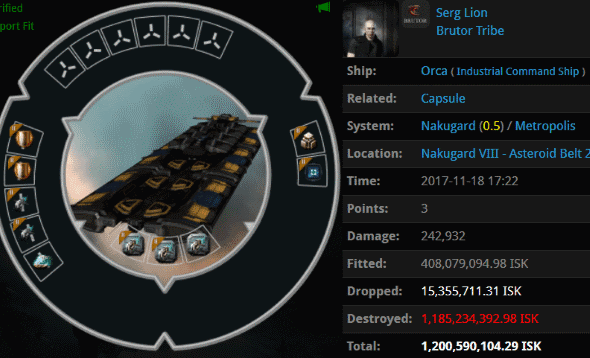 Serg Lion had been the first Orca bot to experience the wrath of Alt's Taloses. In addition, Alt's smartbombing cruiser destroyed Serg's implants. The miner was podded right out of the system. 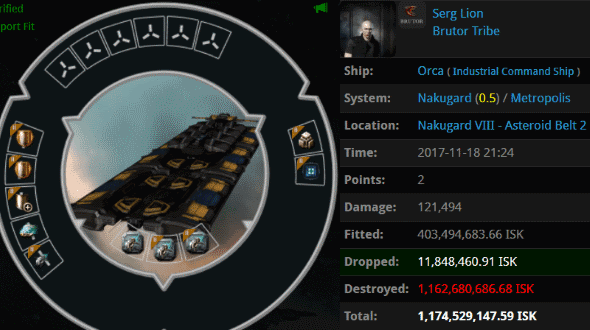 ...But four hours later, Serg returned to the very same asteroid belt in a brand new Orca. What a Goofus! The new Orca's fit was almost identical; a slight improvement to the shield tank was the only evidence that Serg had noticed a problem with his operation. Importantly, Serg still lacked a mining permit. So Alt killed the new Orca. 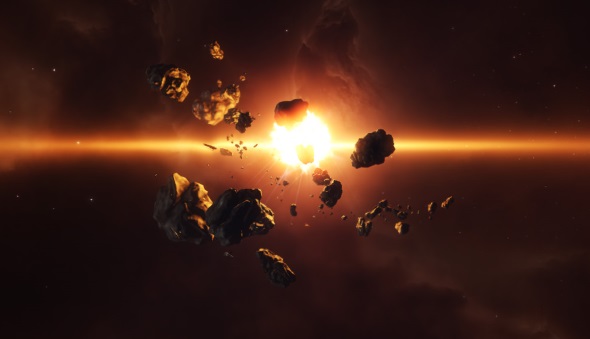 Bots are good for one thing, at least--they make pretty explosions when they die. 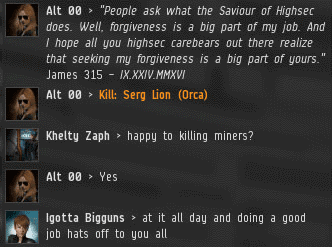 Alt 00 proudly announced the destruction of the fourth mining Orca in just a few hours. Interestingly, she seemed to be winning over some of the locals. 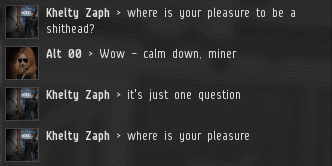 ...Khelty Zaph was not one of them. Serg Lion himself remained silent, as is typical of a miner-bot. But you can always count on a rebel carebear like Khelty to side with bots. 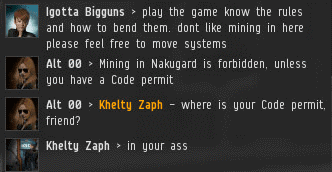 Bot-aspirants are bot sympathizers, too. When bots die, the bot-aspirant miners know they could be next, since there's so little difference between the two groups. 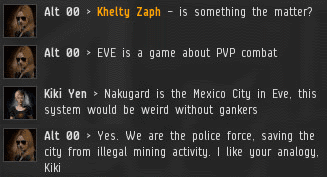 The miners of Nakugard had watched as Alt 00 repeatedly dropped Talos fleets on any miner she didn't like. The carebears knew that they were completely at the mercy of the New Order Agent. They could no longer pretend otherwise. 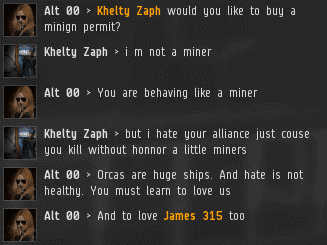 Khelty struggled to explain why she was speaking in defense of a credibly accused botter. When Alt 00 spoke my name, the miner fell silent.

Just then, another mouthy miner spoke up. She identified herself as a member of the resistance. 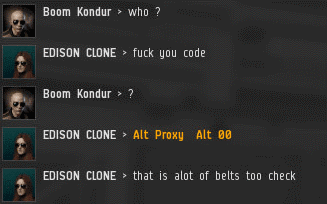 EDISON CLONE attempted to provide an intel report to the miners. It was about as useful as you'd expect from "miner intelligence". 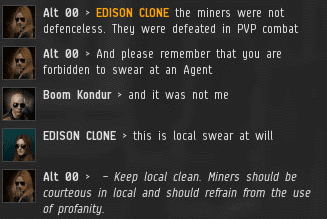 In any event, it wasn't like Alt 00 was trying to be subtle. Her Orca ganks were quite a spectacle, to say the least. 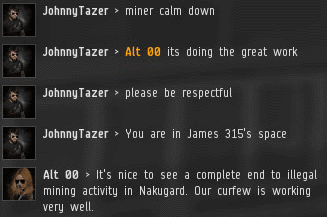 More Nakugard locals sided with the winning team. The death of Serg Lion's second Orca seemed to be the tipping point. The rebel miners evacuated, fleeing for their lives. Nakugard was at peace.