The Orcas of Nakugard, Part 7

Previously, on MinerBumping... Agent Alt 00 brought justice to the Nakugard system by slaughtering its Orca bots and scattering the survivors. The remaining miners acknowledged her ability to destroy any of them at any time she chose. At first, this led to peace and order. But eventually, the miners' pesky emotions began to reassert themselves. 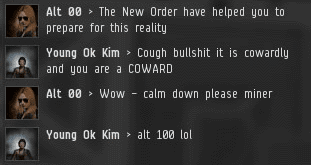 No sooner had Haze simmered down than another rebel popped up in his place.

Young Ok Kim wasn't satisfied with the way Alt 00 handled the Haze case. She identified with Haze because she, too, was an unlicensed miner. A classic case of bias. If the Haze matter had been taken care of more privately, perhaps Young wouldn't have been provoked. Transparency comes at a price.

Like a jaded old prisoner who meets a new inmate and tells him the score, Haze cautioned his fellow miner. Alt 00 had enough DPS at her disposal to kill any carebear, no matter how tanked. 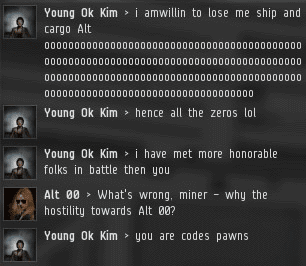 Alt 00 eyed the self-destructive miner with compassion. She wondered what her beef was. 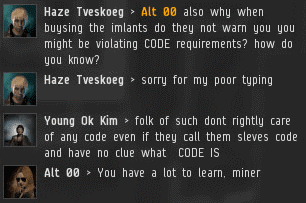 Just then, Haze went back for another good wallow in self-pity. Was Young Ok Kim's defiance stirring him up? 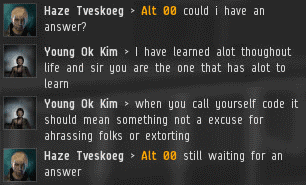 The miners grew more uppity. As Alt 00 suspected, they were feeding off of each other. 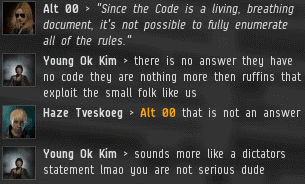 Our Agent uncorked her italics and quoted the Code, but even this was not enough to subdue the unruly pair. 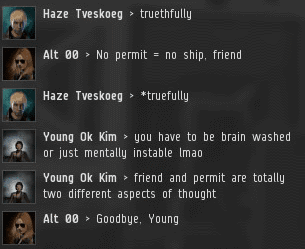 Alt 00 sighed and drew five Catalysts from her deck of gank alts. 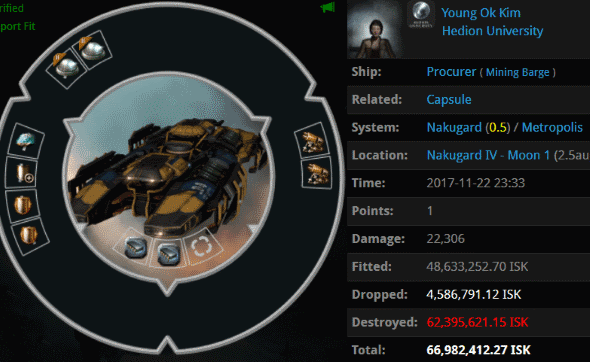 Despite using a semi-tanked Procurer (the kind that rebels say can't be ganked), Young Ok Kim was utterly destroyed. Alt 00 podded her, removing the miner's toxic influence from the system. 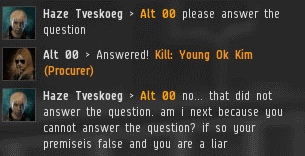 Haze still wasn't satisfied. Alt 00 had killed a miner before his very eyes, but the act hadn't won Haze's heart or mind.

Young remained defiant, too--though now she had to share her troubling thoughts by EVEmail.

Alt 00 was genuinely puzzled. She'd brought so much death and destruction to Nakugard, yet it didn't make the miners love the Code. Was it possible that she was going about this all wrong? Then Alt 00 had a realization: She obviously hadn't killed enough miners yet.