Aaaarrgg has earned a reputation for extreme helpfulness. People come to him for advice, support--and sometimes simply to vent about their personal problems.

Though he's accessible to everyone, Agent Aaaarrgg makes no bones about where he stands on the issues. That is to say, the issue: The Code. He's in favor of it.

The Code influences everything. If you lack the Code, you'll end up looking (and smelling) like war child233.

...And you'll stay that way until you embrace the Code.

Dzipas's alt, sidas 31, lost a Retriever. Instead of wondering what was deficient about the Retriever, he assumed there was something wrong with the guy who won the battle. 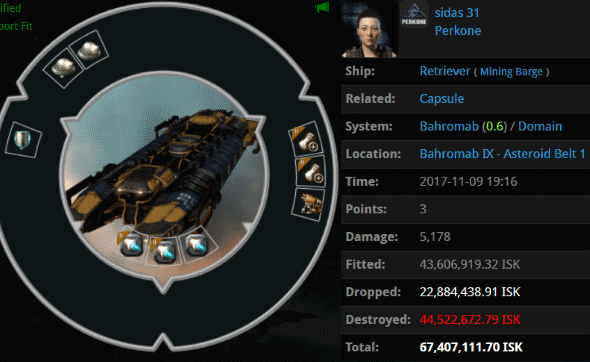 This is where Codelessness gets you.

Some miners wouldn't recognize common sense even if it came right up to them and detonated their mining barge.

Dzipas finally conceded that maybe Aaaarrgg knew what he was doing. The miner rationalized the incident by deciding that it's rude or immoral to win at EVE.

Despite Aaaarrgg's rock star status, he's extraordinarily humble and down-to-earth. He never fails to remind the miners that he gets his inspiration from the Saviour of Highsec. After all, Aaaarrgg didn't just wake up one morning and decide to be awesome; I told him to do it. 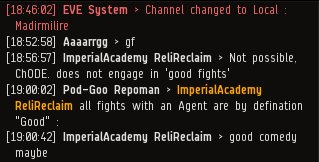 You'd think the shining light of the Code would give miners a reason to smile. Yet there are still plenty of carebears who remain crusty and cynical. ImperialAcademy ReliReclaim falls into that category.

Everyone who's interacted with me knows about my humility. I'm famous for it. If you've ever wondered how the New Order's nigh-omnipotent Agents keep their egos in check, they learned it from me. 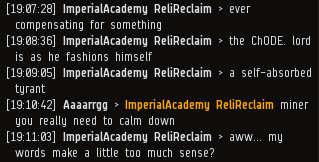 It's amazing what you can accomplish when you're willing to put your ego aside in favor of a great cause. Highsec miners would do well to think less of themselves.
Posted by MinerBumping at 18:01