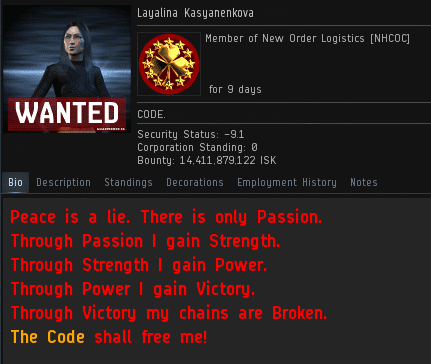 Meet Layalina Kasyanenkova. She's a bright young Agent of the New Order. She believes in the Code and fair play.

Not everyone appreciates fair play. Despite having 20 minutes to display a permit or vacate the asteroid belts, Adrianne Cortanna got herself ganked. So much for the "if only they warned us, then we'd pay" crowd. 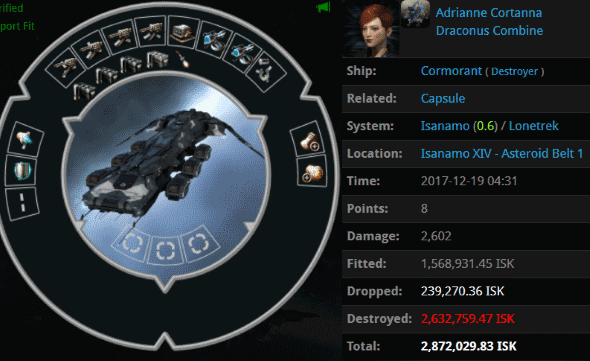 Judging by the ship she lost, nothing could've persuaded Adrianne to buy a permit. Look at that atrocity. Adrianne's Cormorant was "puke tanked": Its only hope of survival was to make a would-be attacker vomit after scanning the fit.

You know, it's one thing to be a bot-aspirant, but it's another thing to flaunt it.

Agent Layalina had her work cut out for her. She was only a few days into New Order Logistics corp, but she already had a high-level Goofus on her hands. Time to sink or swim.

Our Agents always win; the New Order attracts talent. Layalina deftly employed the use of the ultimate highsec litmus test. By speaking my name, she forced the miner to reveal the true depth of her depravity.

Adrianne was certainly an odd duck. She complained about the size of Layalina's bounty, as if it somehow made the gank illegitimate.

Now matter how much helpful advice she received, Adrianne always had a reason to complain about it and declare herself helpless. Don't be surprised to see her join Anti-Ganking one of these days.

Nothing could derail our Agent's optimism. She gave Adrianne the hard sell.

For the briefest of moments, it almost looked like Adrianne might be interesting in joining the New Order family. But out of nowhere, Adrianne had a change of heart, pulling the rug out from underneath our Agent by threatening to petition her.

If Adrianne didn't want to purchase a permit, she should've at least hidden herself in shame. Instead, she began to enlist other locals to join her pity party. The Isanamo system needed another demonstration of the Code's power--and soon.