Previously, on MinerBumping... Mission Ready Mining's defense strategy was in tatters. To defend Gelhan, the corp resorted to repeatedly petitioning Agent Kalorned. And just when they'd become sick to death of being bumped, the miners were greeted by a handful of ganker alts.

Agent AGBee 001 ganked the miners of Gelhan at will. During the 15-minute criminal timer, he engaged MRM in conversation. Both activities drove the carebears to distraction.

A stunning revelation: One of the miners, En-Sabah-Nur, knew an Agent of the New Order in real life. He had powerful friends in highsec!

As AGBee was reeling from En-Sabah-Nur's news, another miner took up a different approach entirely: Sheihara Lightning pleaded for mercy on the grounds of being a newbie. 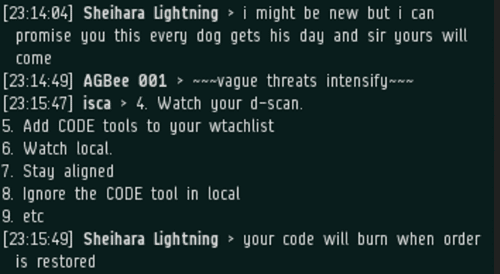 When AGBee offered less than the compassion Sheihara expected, the miner pulled a quick 180. Sheihara would have his revenge against the ganker.

If you gaze too long into the abyss... Sheihara embarked on a new life--one of violence. It's true what they say: PvP begets PvP. 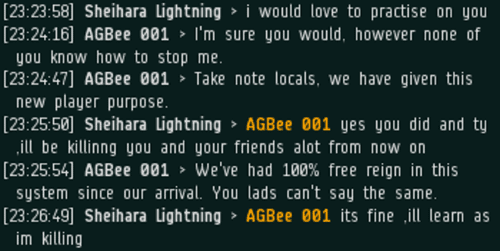 If the miners of MRM had all put down their mining lasers and taken up the cause of the Code, they would've at least had something productive to do during the siege.

...But MRM's miners were docked up instead. Whenever one tried to peek his head out for a moment to get some quality time with the asteroids, he was ganked.

AGBee could kill anyone in MRM he chose, but they wouldn't let him enjoy it. They admitted to being easy pickings--like babies, even.

However, AGBee was an Agent of the New Order. He was filled with the spirit of the Code, which meant that he was having a blast.

The miners, on the other hand, were absolutely miserable. After weeks of being blockaded in Gelhan, they had no sense of humor at all.

As MRM settled into a routine of watching AGBee kill the remaining miners, something unusual occurred. Out of the blue, someone named Apocriphia threatened to petition one of the miners for using foul language.

Apocriphia was a member of The Marmite Collective. Behind the scenes, diplomacy had broken down between the Marmites and MRM, which had tried to hire all available mercenaries to attack the New Order. What would this new development bring in its wake?