Two things are rumored to be extinct in highsec: Anti-Gankers and autopiloting pods.

They're not extinct, though--merely endangered. Agents Aaaarrgg and Pod-Goo RepoWoman were bouncing from gate to gate in search of their favored quarry, the rare and exotic autopiloting pod. As they did so, they came across another unusual sight.

PINCH en Chalune was an honest-to-badness Anti-Ganker. He followed our heroes' Thrashers from gate to gate, hoping to prevent them from ganking any pods.

Agent Pod-Goo RepoWoman dropped the J-bomb in local chat. It yielded truth, as it always does: PINCH revealed himself to be a Russian Anti-Ganker.

Accordingly, Pod-Goo linked a copy of the Code translated into Russian. But it seems PINCH was already familiar with it.

Agent Salah ad-Din al-Jawahiri posted the translation on the MinerBumping forum years ago. Our Agents have made good use of it; the Russian translation of the Code has been read over 23,000 times.

Agent Salah has become quite famous among Russian EVE players. Salah's celebrity can be intimidating; PINCH wasn't sure whether or not he wanted to say hello.

Aaaarrgg and Pod-Goo continued to bounce around, looking for their elusive prey. PINCH insisted that if an autopiloting pod did appear, he would protect it.

But at the very moment PINCH was bragging about his skills, Pod-Goo RepoWoman smashed a 100 million isk pod one system over. Aaaarrgg linked the kill and asked PINCH for his thoughts.

Pod-Goo RepoWoman popped back into the system just in time to watch PINCH try to explain away his latest failure to prevent a gank. Our Agent casually brushed aside PINCH's embarrassing attempt at spin.

PINCH didn't like being humiliated in local chat. He planned to get his revenge by preventing a gank. He'd failed to stop Pod-Goo RepoWoman, but maybe he could rescue a pod from Aaaarrgg? 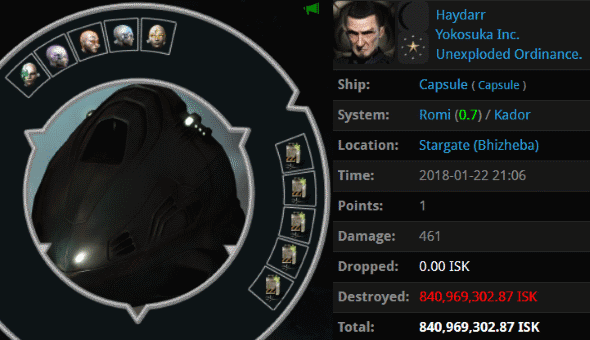 Alas, at that very moment, Aaaarrgg was ganking an 840 million isk pod one jump over in the other direction. (Isn't it typical? You wait all day for a pod and then two arrive back-to-back.)

There was nowhere left for PINCH to hide. He'd bragged to everyone about his abilities as an Anti-Ganker, only to have both of the gankers he was tracking pull off a gank right under his nose. 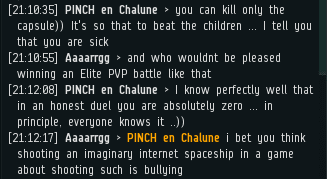 PINCH no longer even pretended to be effective at stopping ganks. Instead, he condemned our Agents for their immoral deeds. Shedding tears was the only thing the Anti-Ganker was able to do. 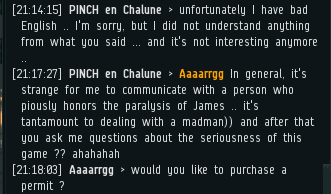 When PINCH invoked the name of the Saviour of Highsec, it was clear that he wouldn't be sticking around much longer. When rebels speak my name, they very often log off soon afterward.

PINCH indeed chose to quit EVE for the day. He was able to prevent just as many ganks while logged off, anyway.
Posted by MinerBumping at 18:33