The Truth About Wardecs, Part 5

Previously, on MinerBumping... The carebears demanded that restrictions be placed on wardecs so that wars would "have an end result". But this was exposed for the nonsense that it is.

Among theme parkists and their allies in CCP, the CSM, and elsewhere, there's a long-standing tradition of complaining that wardec mechanics are unfairly stacked in favor of the aggressor. If you initiate a wardec against someone else, so we're told, you have an insurmountable advantage.

All the way back in 2013, I wrote an editorial for TheMittani.com on this very subject. Not to toot my own horn, but I destroyed the carebears' argument and, also to my great credit, showed magnanimity in victory. For the next five and a half years, CCP declined to nerf wardecs. Maybe they were persuaded by my editorial. Or maybe they were simply too lazy to fix this supposedly dire problem that was killing EVE and costing the company millions of dollars in subscription fees.

But those who do not learn from their history (or from the Saviour of Highsec) are doomed to repeat it. The "wardecs unfairly favor the attacker" fallacy has come back with a vengeance. In keeping with modern carebear lingo, you might call it a "new returning fallacy": It's many years old, but it expects to be given special treatment as though it were brand new. During the CSM summit last month, this myth about wardecs was rediscovered, much to the awe of all present:

An easy way to judge the fairness of a game mechanic is to imagine a conflict between two identical alliances. The two are equal in every way. Who wins the fight? If the game mechanic is completely fair, then the fight is a draw, a toss-up. In the case of our wardec mechanics, the defending side would win, because they can call in allies. (Without the war ally mechanic, the system would be fair, unless you envision the wardec fee affecting the odds in some minuscule but statistically measurable way.)

The nullsec example is important because aggressors could and did succeed in sov wars, despite the mechanics being stacked in the defender's favor. In fact, the aggressor usually did win. That's because the attacking side only chose to become an attacker after evaluating the strength of his potential opponent and calculating the odds of overcoming the defender's advantage.

...Which is a nice way of saying that nullsec powers preyed on the weak. Only when the attacker misjudged the strength of his opponent did the defender win. On the other hand, if we take something more like an omniscient point of view, the defenders won every time a potential attacker decided not to go to war. From the defender's point of view, a war that doesn't happen is as good as a victory--and probably a lot cheaper.

The fact that we can't see these invisible victories, and the fact that we can see every attacker's victory, might lead us to believe the aggressor always wins, even when we know for certain that the sov mechanics favor the defender. When the aggressor does win, it's because the attacking alliance is stronger. The stronger alliance has the advantage, but its advantages are not supplied by the game mechanics. If we fail to realize this, then we would be misled into thinking every game mechanic--no matter how stacked in favor of the defender--actually favors the attacker, because the wars that take place tend to result in victories for the attacker.

This brings us to the presentation given by CCP Burger at the EVE Vegas event a few days ago. During the presentation, CCP Burger released some statistics about wardecs in an attempt to justify CCP's newly announced nerf to wardecs (which we'll discuss in some detail later on). Judging by his profile, CCP Burger joined the company in 2015, a couple years after we dealt with CCP's previous anti-wardec push. If CCP Burger was unfamiliar with the 2013 debate, then that would be another example of why CCP should just let me make these design decisions, rather than entrusting the task to CCP employees. 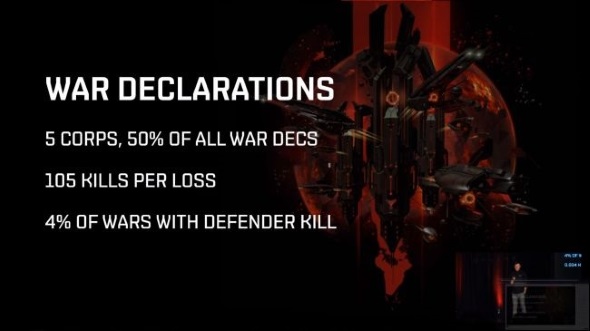 The first statistic is that only five corporations (they're called "alliances", Burger) are responsible for half of the wardecs in EVE. (The five should have been identified and given a place of honour in the presentation, but I guess that's too much to ask.) Now, this statistic isn't actually a criticism of the wardec mechanics, but it's an attempt to suggest that few people will miss wardecs after they're gone. In the same vein, I could say that nearly all of nullsec (if not all of it) is controlled by five coalitions.

The next two stats are meant to prove the overwhelming advantage that the current wardec system gives the attacker. In looking at the stats, though, one must wonder: If initiating a wardec makes you so powerful, why don't more people do it? It seems like an easy way to achieve an elite 105 kill-to-death ratio. I suppose EVE players aren't risk-averse or cutthroat enough to engage in the use of such an obviously abusive game mechanic.

The 4% stat is interesting, but misleading. As we learned from CCP's study of wardecs back in 2013, which I discussed in my editorial for TheMittani.com, only a small percentage of wardecs result in even a single kill for either side. This fact is conveniently omitted in CCP Burger's presentation, making it appear the defenders perform even worse than they actually do. Even so, we can't ignore that 105 KDR. How can something like that happen?

Everyone who has experience with wardecs will tell you the same thing. Even if you use use a one-member corporation to do the wardeccing, carebears are usually so intimidated that they'll drop corp, dissolve their corp, or stay docked up. Such wars result in no kills. Some carebears will continue to engage in carebearing during a war. The best of them (a low bar, I'll grant you) will defend their carebear operations with actual combat ships. They might even bring enough firepower to ward off an attack, if the wardeccing organization is small enough, or is a solo operator. Again, no kills, even though the defender has gotten his way.

More often, carebears choose not to bring defense ships, but will stay alert. Either through the use of scouts or simply keeping a watchful eye on local, they'll detect a war target entering the system and they'll run and hide. The defender has escaped. If you call this a win, still, no kill is recorded.

If the carebear is a bot-aspirant, like so many of them are, he'll be caught, and another one of the wardeccer's 105 kills per death will be recorded. It's unlikely that the carebear will score a kill against the wardeccer, since he's probably not even at his keyboard.

Carebears are the gazelles of highsec. The wardeccers, naturally, are the lions. The lions hunt the gazelles, and the gazelles try to get away. We do not expect gazelles and lions to have an even kill-to-death ratio. Most carebears have no more interest in killing wardeccers than gazelles have in killing lions. They want to engage in PvE. They would prefer it if there were no lions, only vegetation. But there are lions, and the weak gazelles are meant to be their food.

Bot-aspirants plague highsec. They go there for the safety and for the convenience. They've heard rumors that nullsec mining is safer than highsec mining, but they aren't interested in the "safety" that nullsec has to offer. They're satisfied with nothing less than the kind of safety that allows them to be AFK. They think they're entitled to it. And they'd rather mine five jumps from Jita than fifty.

We do not expect these creatures to score kills against the wardeccers. PvP isn't "relaxing", and it can't be done AFK. This bot-aspirancy is the same reason why carebears don't even bother to call in allies, even though the wardec system allows them to have someone else do their fighting for them. Carebears simply can't be bothered with anything that isn't AFK isk grinding. They don't want PvP, but for the sake of EVE, they need to have their ships blown up. Next time, we shall discuss why.