Previously, on MinerBumping... Anti-Code rebel Lahnius hoped to destroy the mighty CODE. alliance. His plan went awry after he was wardecced and lost one of his Nakugard refineries. In the aftermath, Lahnius reinvented himself for at least the fourth time--now as an "agent of chaos". 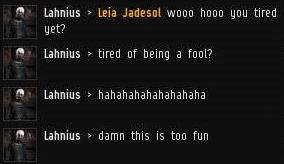 After having suffered so many defeats, Lahnius was thoroughly enjoying his new "agent of chaos" persona. But it wasn't clear what precisely this new role entailed, other than talking (mostly to himself) in local. 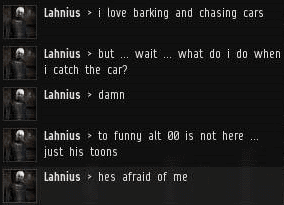 Before, Lahnius had lived each day in fear of losing his refineries. Now it was his turn to strike fear into the hearts of his enemies. 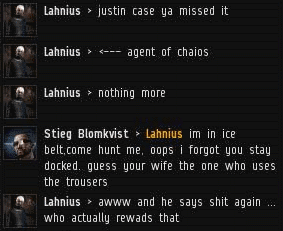 Lahnius was convinced that he could terrorize the Nakugard system with his newfound unpredictability. So far, however, they remained unintimidated.

Lahnius had yet to translate his new agent of chaos status into any form of action. Yet he seemed to feel that he had already pulled off something clever. 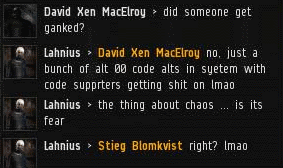 A curious onlooker asked what had happened. He assumed that with all the talk in local, something must have taken place. Nope.

Perhaps Lahnius had grown tired of all the traditional ways of playing EVE. For him, the game had become little more than a chat room. But it wouldn't be long before random Nakugard residents intruded upon local chat. 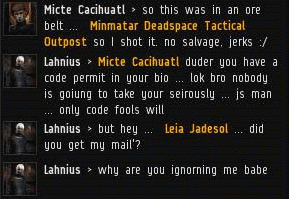 Lahnius grew annoyed. People were going about their business as if he didn't exist. That wasn't chaos! 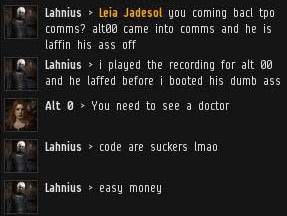 And so the agent of chaos activated the next phase of his operation: Pretending that people were talking to him on TeamSpeak. 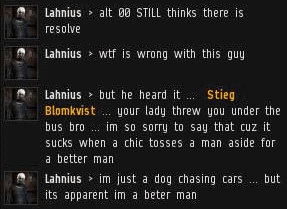 Lahnius spread the word that people were joining his TeamSpeak channel to talk about each other behind their backs. Among the flaws in his plan: None of the targets liked Lahnius or believed anything he said. 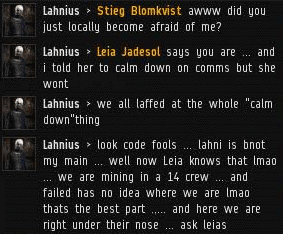 Previously, Lahnius had used his alt accounts to carry on conversations with him in local. That proved to be expensive; his alts were ambushed and lost Navy Scorpions. Imaginary TeamSpeak conversations were much cheaper. 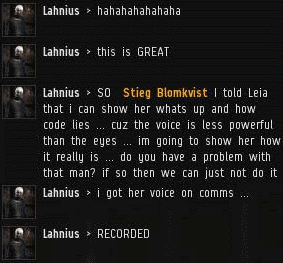 Don't expect to listen to any of these recordings. Lahnius keeps them in a very secure location, I'm sure.

Lahnius responded to skeptics by threatening to produce incriminating chat logs. (Those, too, are kept in a very secure location.) 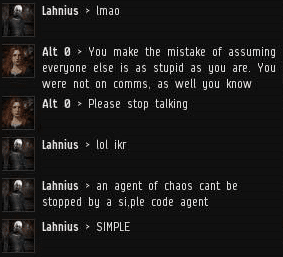 Though outwardly confident, Lahnius had to face the possibility that his "agent of chaos" campaign might fail like everything else he had tried. But in that case, what would his future hold?