Previously, on MinerBumping... Anti-Code rebel Lahnius fell on hard times. He had vowed to destroy the mighty CODE. alliance, but all of his plans backfired. Reflecting upon his career of failure, Lahnius made yet another bizarre speech in Nakugard local. 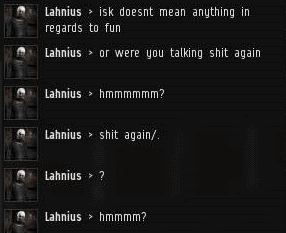 Moments earlier, Lahnius had threatened to reveal a deep, dark secret hidden at the highest levels of the CODE. alliance. Then he abruptly changed the subject. 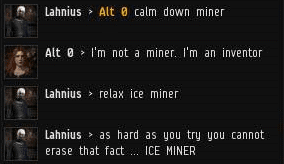 Lahnius cast his eyes upon the list of players in Nakugard local. Now he would judge them. 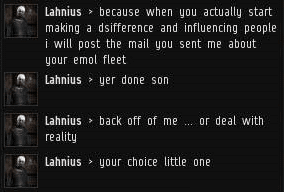 First, Lahnius attempted to blackmail Alt 0, whom he accused of secretly running a fleet of miner bots. 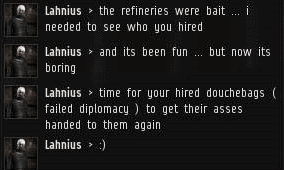 Lahnius wasn't afraid to go on tangents. He suddenly remembered that he had meant to get his refineries destroyed all along. It was worth it for the intel. 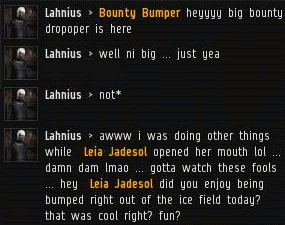 Like an angry drunk, Lahnius started confronting random locals and picking fights with them. 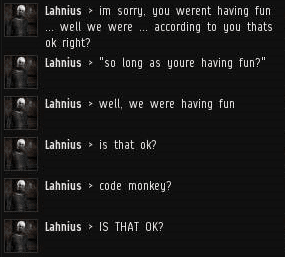 The anti-Code leader was barking mad. Peaceful citizens of Nakugard could only observe the spectacle in disgust. 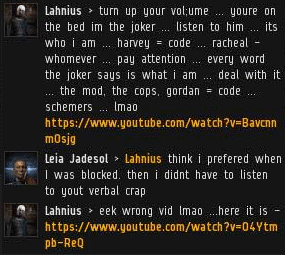 Staggering through his speech in random directions, Lahnius came up with a new theme--one which he would spend quite some time developing. 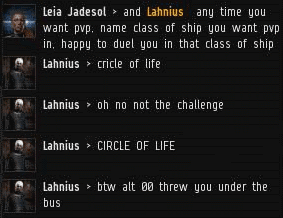 Lahnius was briefly interrupted by Leia Jadesol, who invited him to engage in some spaceship combat. Needless to say, the rebel leader had other plans. 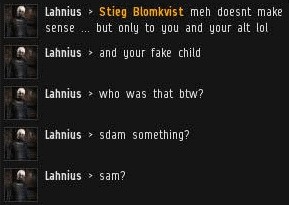 Another round of strange accusations followed. No one in Nakugard was exempt. 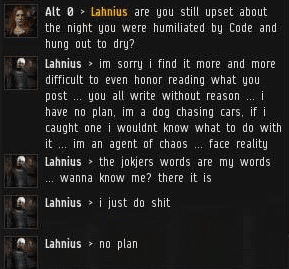 Lahnius returned to the theme he referenced earlier. He was no longer the loyal CODE. ganker, the Anti-Ganking captain, the super-spy, or the "Hardcore AG" founder. Lahnius reinvented himself as an agent of chaos. 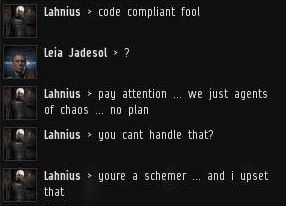 In other words, Lahnius was just a guy who did random stuff for no particular reason. It was his most convincing role yet. 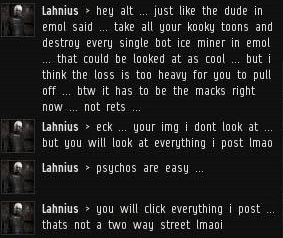 As another night of rage and confusion went on, Lahnius grew more incoherent. Would sanity ever be restored to Nakugard?