If you bring an unlicensed freighter into highsec, there's a really good chance that you're going to run into this guy: 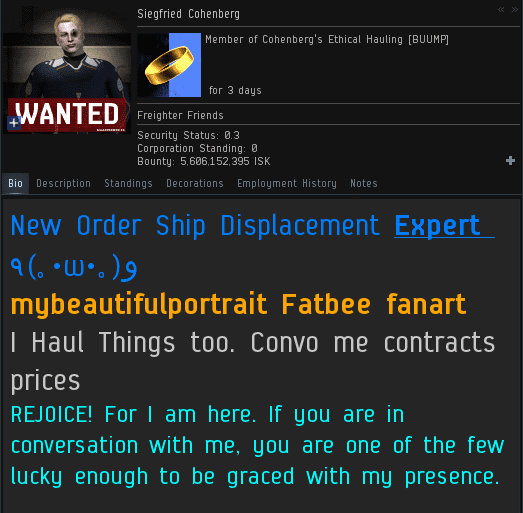 Or, rather, he'll run into you. Agent Siegfried Cohenberg has been bumping freighters for years. He's good at it.

An Obelisk pilot named Aldur Aldent made his way into the Sivala system, right next door to Uedama. He must've heard that it was dangerous, so he remained at his keyboard. But he failed to purchase a permit.

Aldur pretended not to know why he was being bump-tackled, so our Agent sought to test the carebear.

Aldur was given the opportunity to drop the facade, admit his knowledge of the Code, and confess his crimes. Instead, Aldur chose to disconnect from EVE. He hoped that by doing so, his freighter would emergency warp and automatically escape from the bumps.

Five minutes later, Aldur logged back into the game, only to find that his freighter was still bump-tackled by Siegfried. But fortune smiled upon Aldur--he was contacted out of the blue by a courteous stranger, Amadeo Giannini.


Amadeo Giannini > do you know how webs work?
Aldur Aldent > yes. but i am not accepting a duel. you could be his alt.
Amadeo Giannini > I'm not his alt. I hate that guy, hes the reaosn why haulers like us even need webbing alts

At first, Aldur was suspicious of the good Samaritan. For all he knew, Amadeo was Siegfried in disguise.

Then again, that was unlikely. Their monocles aren't even on the same eye.

Aldur was willing to at least hear what Amadeo had to say. Webbing his freighter seemed like the only escape from Siegfried's grasp. Still, he preferred to have his own alt do the webbing, rather than trusting a mysterious stranger to do it.

Then something unexpected occurred--something that changed the equation entirely. Amadeo sent Aldur 10 million isk. You read that right: The stranger was giving 10 million to the freighter pilot, not the other way around.

As it turned out, 10 million isk--though it may not sound like much--was just enough money to serve as a demonstration of trust and good faith.

Aldur accepted the duel request from Amadeo. This allowed Amadeo to web Aldur's freighter without CONCORD interference. However, if Amadeo had different intentions, the duel would also enable him to destroy the freighter.