If you're on the EVE subreddit and you want to read the comments on a thread, always scroll down to the bottom first--that's where the best replies are. It's usually where our Agents' comments can be found.

Someone made a thread asking for advice on how to steal the loot earned by highsec gankers when they kill a carebear. Agent Minx Mattel offered a compelling alternative.

What followed was an exchange between our Agent and a user by the name of "TheGigaBrain", copied into text by EVEmail for superior readability. Though not the original poster himself, TheGigaBrain was inexplicably infuriated by Minx's comment.

TheGigaBrain seemed to be an example of The Manipulator, a Code-hater who claims not to mind gankers but wishes that our Agents wouldn't get tied up in all that "Code" stuff. 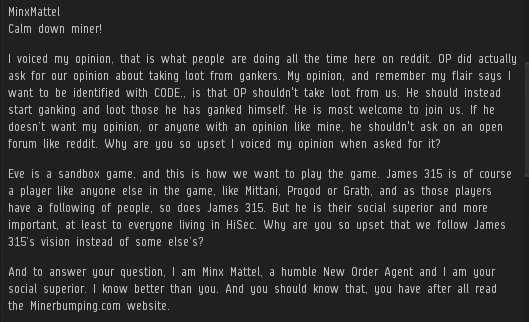 Given the chance to disavow the Code and gain a random Redditor's approval, Minx refused. She instead gave the Code a ringing endorsement in a stirring speech.

Incredibly, the Redditor ignored the passion and sincerity of Minx's words. He refused to embrace the Code, instead composing a point-by-point objection to Minx's speech. What a cynic!

TheGigaBrain was incensed. It was bad enough that someone might be roleplaying in a MMORPG. But to not even be able to tell for certain whether someone was roleplaying? That was a nightmare, one that inspired in TheGigaBrain the most intense hatred for the Code.

As the conversation unfolded, the Redditor linked his EVE character's zKillboard record as proof that he wasn't a miner.

Agent Minx did a quick search of the killboard and found something shocking. 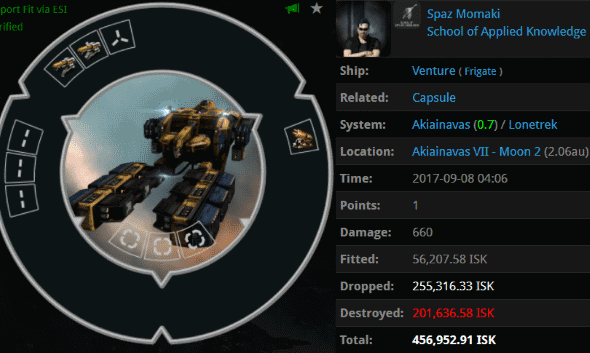 A year earlier, when the Redditor was a member of Pandemic Horde, he engaged in the ganking of newbies. One was only a day old at the time. Another, less than a week old, was ganked in the Akiainavas system. That struck a chord with Agent Minx.

As we saw in the Forever Young series, CCP's rules on "rookie griefing" offer newbies special protection in the Akiainavas system. Agent Minx herself had gotten yelled at by a crusty old miner who tried to claim immunity under that rule.

Thus were the anti-Code forces pitted against one another. How would TheGigaBrain respond to this apparent contradiction? Would he admit his own guilt, or would he be forced to take an even harder-line position in favor of ganking than CCP and the gankers themselves?

There you have it. A self-professed hater of the Code says it's okay to gank newbies in a rookie system. Perhaps his space lawyer and the Anti-Gankers' space lawyers should get together and fight this one out?
Posted by MinerBumping at 18:06