When people read Kills of the Week posts, they often ask, "Who are these loopy carebears? Who loses ships like these, and how do they respond to being ganked?" 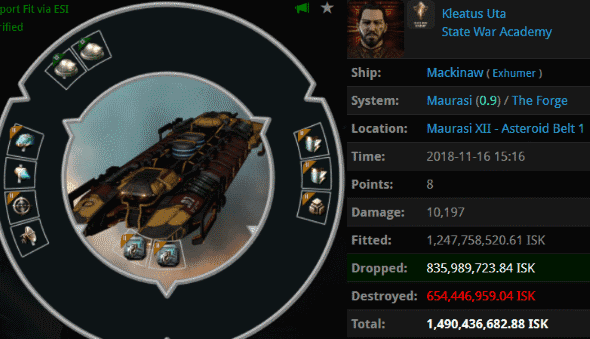 Today, we'll meet Kleatus Uta, the Mackinaw pilot who was featured in the most recent KotW. Look at his ship, and try to imagine the sort of fellow he is. 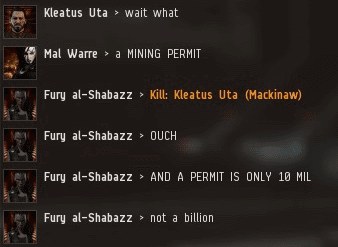 Kleatus is probably about what you'd expect. 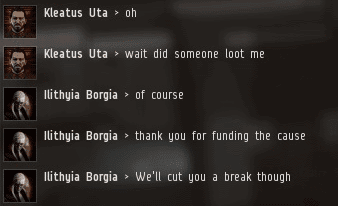 For the first time in two years, Kleatus interacted with his fellow EVE players. He was bewildered by the experience. 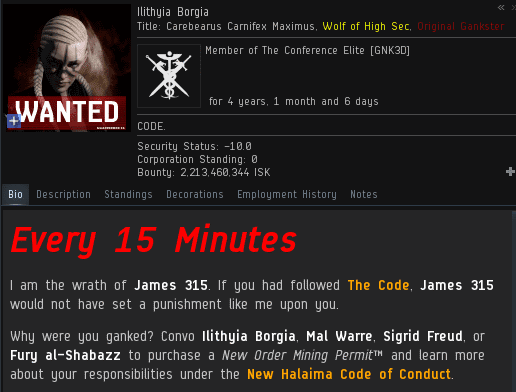 Kleatus was in luck: He was now on the radar of Agent Ilithyia Borgia, one of the game's most elite PvP'ers. When she's in a good mood, she sells carebears their own loot back.

The miner wasn't sure how to behave around other people. If he ever knew, he was rusty.

Kleatus had the opportunity of a lifetime: Here he was, face to face with a famous Code enforcement professional. But all he could think about was how he could get back to mining.

The miner decided he didn't enjoy the company of his fellow EVE players. Nor did he approve of their Code.

Reading comprehension--and comprehension in general--were not Kleatus' strong suits. He still didn't understand how mining permits worked. Eventually, however, he discovered that he could send a reimbursement petition to the Saviour of Highsec.

Let's see how our new friend Kleatus characterized the situation: 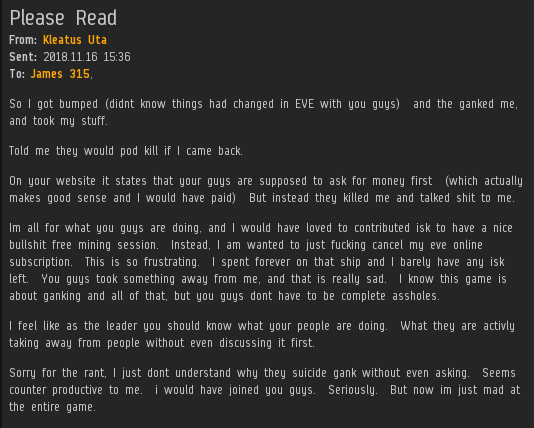 Kleatus certainly had an interesting interpretation of what had happened to him. Regardless, he threatened to quit EVE--thereby threatening CCP's business goals, too. Ilithyia to the rescue:

The miner was given the chance to buy his equipment back (the stuff that survived, anyway), plus a mining permit. Buying opportunities all around.

Kleatus was furious. Why weren't people giving him a bunch of free stuff after he'd been ganked in a 1.4 billion isk Mackinaw?

The miner came to the conclusion that EVE was only worth playing if he could AFK mine with a blingy exhumer, in highsec, in absolute safety. And he needed his loss fully reimbursed. Then--and only then--would the EVE community be blessed by his continued presence in the game.

Fortunately for all concerned, the Kleatuses of the world do not make the rules. That's what the Code is for. 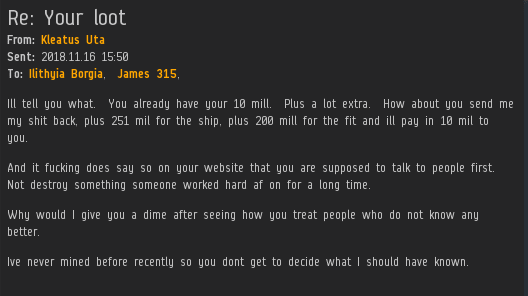 Master negotiator Kleatus offered to buy a permit for 10 million isk if he first received about a billion isk from our Agent. 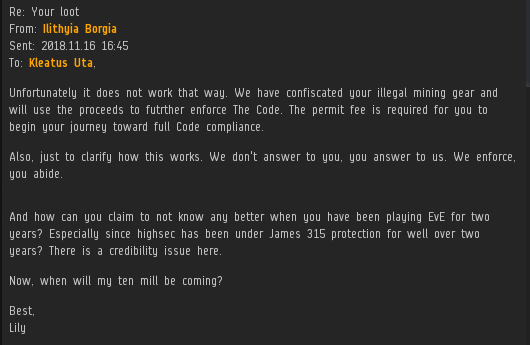 There are two visions for EVE's future. Kleatus has one, Ilithyia has the other. Tell me, dear reader, whose side are you on?
Posted by MinerBumping at 18:07