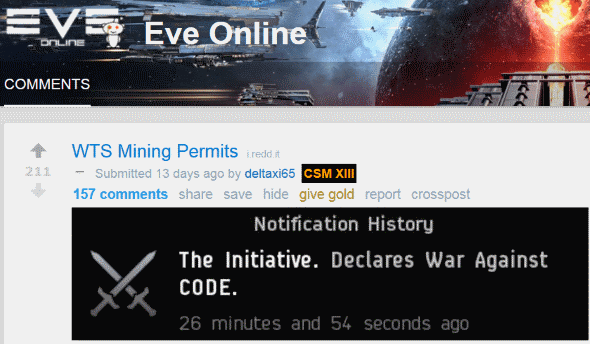 A spokesman for The Initiative., one of nullsec's biggest alliances, announced that it was declaring war against the mighty CODE. alliance.

Its sister alliance, too, was joining the fight. Over five thousand battle-hardened nullsec dwellers--members of the formidable Imperium coalition--were going to take the fight to highsec.

The EVE subreddit, long a bastion of carebearism and bot-aspirancy, responded with cheers.

...And upvotes. The Initiative.'s announcement soon hit the top of the subreddit. Carebears were ecstatic. At last, CODE. was finally going to get what was coming to them. Their days were numbered.

But was it false hope? After all, there had been so many disappointments before. Reddit didn't think so. This time was different. For once, their powerful friends in nullsec were truly on their side. These were serious empire-builders with a reputation for crushing their opponents. We're not talking about a bunch of incompetent Anti-Gankers.

There was some confusion about the politics of it all. Conspiracy theorists have long believed CODE. to be a bunch of Goon alts. Some have even accused The Mittani himself of secretly being the Saviour of Highsec. No matter. What was important is that the New Order's gankers, after so many years of ruling highsec uncontested, were finally going to meet some real opposition.

CODE.'s imminent demise at the hands of an Imperium member would have wide-ranging consequences. There was much analysis to be done. It would be a long time before it could all be digested.

However, there was another angle here, one missed by Reddit. Namely, why The Initiative.? The owner of the Reddit account that proudly announced the wardec was none other than Brisc Rubal, a member of The Initiative. who also happened to be a current CSM member. If that name sounds familiar, you might remember him from the most recent CSM minutes.


"CCP Larrikin pulls up activity data for players of corporations that have wars declared against them and it shows considerable activity drops in all activities during the war. They also show that the low activity continues after the war ends. Brisc Rubal noted that the numbers here were so stark, it would justify immediately removing war decs as a mechanic and promising a fix after the fact."

By chance or by fate--or by design--it was none other than the CSM member who most loudly pushed for an end to wardecs. As you'd expect from a nullsec entity, The Initiative. only very rarely files wardecs against other alliances; it's almost always the recipient of wardecs. But now The Initiative. was wardeccing CODE. just one day after the conclusion of the Truth About Wardecs series was published on MinerBumping.

The odds didn't look good for the mighty CODE. alliance. All the experts and statistics said so. And nobody knew that better than Brisc Rubal himself. Perhaps using the grossly unfair wardec mechanics would send a message that he'd been right all along? The destruction of CODE. in this manner would certainly be a powerful rebuttal to the essays about wardecs on MinerBumping. 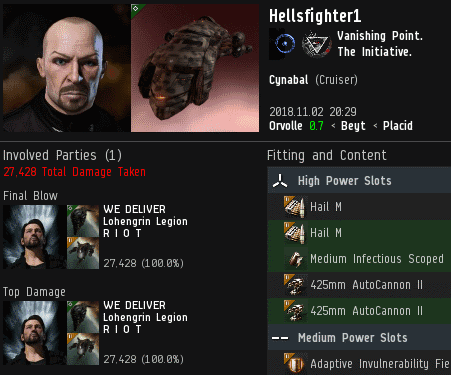 As the killmails came in, it was clear that... Wait, why isn't there a CODE. member on this CODE. wardec killmail?

When Brisc announced the war on Reddit, it drew attention from some alliances that actually use wardecs. And as they knew, wardec mechanics are tilted in favor of the defender, who gets to call in allies. As it happened, they all felt like offering to join in on this particular wardec for free. 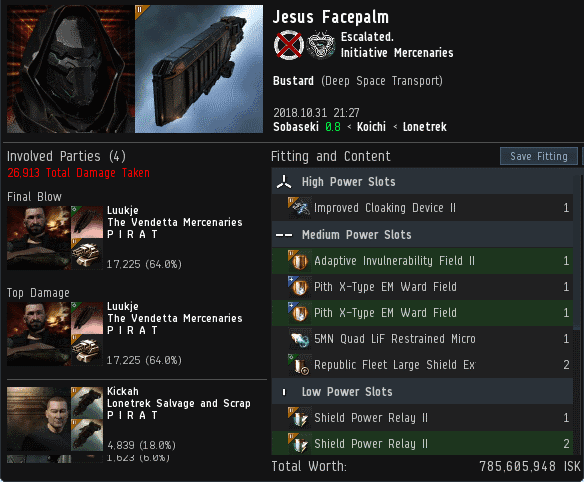 As a result, the wardecs against CODE. simply resulted in kills like this. Members of The Initiative. and Initiative Mercenaries, used to roaming highsec in safety, were preyed upon by wardeccers who got to shoot them without needing to pay the usual fee for wardeccing a big alliance. Meanwhile, CODE. didn't have to do anything.

Indeed, both wardecs passed unnoticed among the CODE. members, who may as well have been nonparticipants. Maybe, just maybe, the wardec mechanics aren't so tilted in favor of the aggressor after all.

Then again, the results can be explained another way: The CODE always wins. Always!
Posted by MinerBumping at 18:07