I've taken to calling it the "Phantom Provision".

You know how it goes: A miner gets ganked by an Agent, the Agent tells him to buy a mining permit, and the miner claims that the Agent didn't follow his own Code. This same miner--who previously pretended to be totally ignorant of the Code--goes on to lecture the Agent about a miner's right to warned prior to the gank. "You have to ask me if I'm AFK," says the miner. "It's in your Code."

The miner's whining doesn't stop there, of course. His appeal to the Phantom Provision is only the beginning of his complaining, threatening, and dissembling. "I'm a new [returning] player," says the miner. "I don't have 10 million isk." Which is quickly followed by (never mind the contradiction): "I would've paid if you had asked first."

Miners are natural liars--hence their need for the Code and its enforcers to keep them in check. Yet the lie of the Phantom Provision is one of their more interesting lies. It's certainly among the most common, which is one of the reasons why it's so interesting. Somehow, some way, miners from all over the globe manage to pluck the same nonexistent provision from out the ether.


"No AFK mining allowed. All miners are expected to remain at their keyboards at all times, and are required to prove their presence by responding in local when requested by the Supreme Protector or one of his Agents."

If this clause is indeed the inspiration for the Phantom Provision, the phenomenon is no less extraordinary. Consider what the Code looks like, at first, to someone who has never read it: 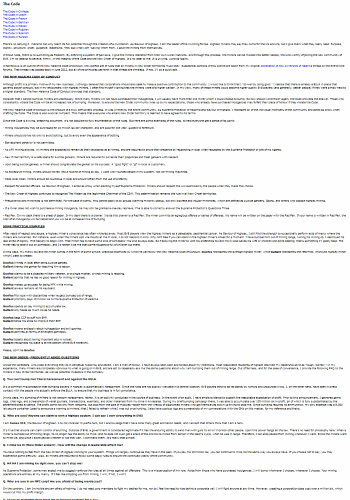 Isn't it amazing that so many miners are able to zero-in on precisely the same passage and misinterpret it in precisely the same way? There's so much in the Code, yet that one provision, in theory, attracts their attention like a magnet and doesn't let go.

Of course, the miners would prefer it if our Agents were required to, essentially, ask a miner's permission before ganking him. When they're honest, the miners admit they know this isn't the case. 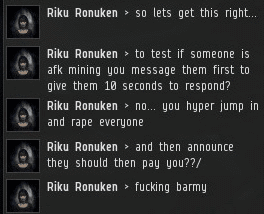 The Phantom Provision is closely linked to the idea that a miner shouldn't be considered unlicensed unless he is specifically invited to purchase a permit and refuses. This delusion was memorably rebuked in a MinerBumping post from all the way back in 2014:


"Even the new miners know about the Code. The New Order's presence is too big to ignore, even for a bot-aspirant. They don't need a 'warning' before they get ganked. They've already been warned. Carebears of highsec, the time for warnings is over. The time for payment has come."

Indeed, the letter of the Code and the enforcement of the Code in practice have both been consistent on this matter from the very beginning: Miners who violate the Code face punishment. Their responsibility to obey the Code does not begin after an Agent interacts with them; it begins from the moment they log in.

Even so, budding space lawyers continue to press their case in favor of mandatory AFK checks before a gank may occur. Let's take another look at the provision assumed to be the source of the carebears' confusion:


"No AFK mining allowed. All miners are expected to remain at their keyboards at all times, and are required to prove their presence by responding in local when requested by the Supreme Protector or one of his Agents."

(Side note: So many years into the Code era, it's difficult to fully appreciate just how revolutionary this provision was when it was first written in 2012. A ban on AFK mining in highsec! Thank goodness for the Code.)

In addition to banning AFK mining, the provision requires miners to respond in local when requested. The key phrase: In addition. The second sentence expands the miner's responsibilities, rather than limiting them. It doesn't give a miner permission to engage in AFK mining on the occasions when no one speaks to him in local.

...Which brings me to another point. The Code also prohibits botting. A miner who uses a macro mining program can be ganked even if he's at his keyboard. Likewise, a miner may be ganked for violating any other provision of the Code. The Code is not a menu. Carebears must obey all of it.

You'd think that miners would understand this, but clearly they don't: Virtually every miner who cites the Phantom Provision also lacks a mining permit. The lack of a permit is grounds for termination, regardless of whether the miner was AFK. Logically, an unlicensed miner should never complain about not being given an AFK check, but time and time again, they demand reimbursement.

Perhaps these miners believe that the permits give them permission to mine AFK. In their wickedness, they may reason among themselves, "I can pay 10 million isk for the right to AFK mine, but otherwise, I must remain at my keyboard. As long as I respond to an Agent in local chat, I cannot be ganked."

That would be a foul and demented Code. After all, it would imply that all of a miner's obligations under the Code can be purchased away with 10 million isk. What about the rule against botting? A miner could claim that the permits are a license to bot. Can you imagine the public outcry?

No, ours is a just Code. Miners, if you disobey any provision of the Code, it is right and just and good when you get ganked.

Always!
Posted by MinerBumping at 18:02