The Lifeblood of EVE

The answer, of course, is the Code. The Code is the lifeblood of EVE.

And no single alliance brings more to the game than the mighty CODE. alliance. Interestingly, CODE. was created to advance the cause of the Code. Coincidence? I think not.

The very presence of a single player with the CODE. ticker is enough to transform an otherwise dull system.

(It's noteworthy that a miner's concern for the newbies suddenly vanishes when they see a "new" player mining that juicy asteroid they've been coveting.) 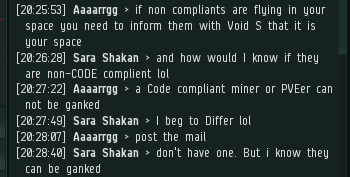 If EVE is a party, then CODE. is the life of the party. Naturally, the carebears get jealous. They fill their own heads with all sorts of lies.

The carebear asks, "Why don't you warn us instead of killing us?" Because the carebear's only talent is self-deception. He'll persuade himself to ignore the warning. By contrast, a lossmail is undeniable. A carebear can't lie his way out of a lost ship. Hence the tears.

The miner vows to fight on, in defiance of the Code that took away his ship. Watch their actions, though. Do they fly a tankier ship next time? Do they dock up when they see a CODE. member in system--and is that why they despise the CODE. ticker so much?

The CODE. ticker means that it's time to stop mining and start whining in local. The name of James 315 means that highsec will never be the same again.

The pre-2012 days of endless AFK mining with no punishment aside from one or two weeks of Hulkageddon per year--those days are over, never to return. That's why the oldest miners hate us the most. It's also why the name of the Saviour of Highsec burns like no other.

Rather, our Agents come to EVE for the same reason as all good EVE players do: The Code.

The Code is in EVE's DNA. It's the game's lifeblood. Is it any wonder that everyone in highsec is so preoccupied with us, and that they dance to our tune?
Posted by MinerBumping at 18:01