In the past, we've seen how miners who oppose the New Order can become entranced by fantasies of my real-life suicide or other bodily harm coming to me. 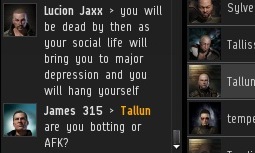 As I was bumping miners in Kamio, some asked about my plans for future expansion. When I indicated a desire to spread my reach across highsec, Lucion Jaxx took issue. After he disturbed miners by suggesting opposition to me, I had no choice but to bump his hulk (yes, some people still fly those) out of mining range, precisely twice. He refused to pay for his mining permit and docked up for the day. I considered the matter settled. 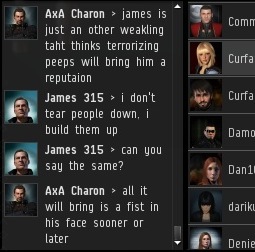 But the seed was planted. Others also began to ponder the possibility of defeating the Supreme Protector of Kamio by striking at the human operator, bypassing my Invincible Stabber entirely.

The concept appealed to Lucion, still steaming from being bumped out of range. Threats of real-life harm are, of course, against the EULA--though highsec miners have a mixed record when it comes to EULA violations.

I asked Lucion if he really did ever attend Fanfest, and he made the dubious claim that he had punched The Mittani during a previous one. Presumably the assault was in response to The Mittani's own anti-miner activities. 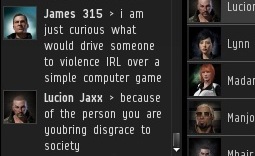 I attempted to defuse the situation by appealing to reason. After all, why attack someone over a computer game? Lucion demurred, so I reminded him that such attacks are criminal in nature.

However, it was clear Lucion intended to make a clean getaway. He also pointed out that the penalty would likely involve only a fine, not imprisonment. I responded by appealing to the higher ideal of a peaceful civilization in which people resolve their disputes with words, not fists.

Lucion's nihilism knew no bounds. As a last resort, I appealed to his love of EVE. Surely if he attacked someone at Fanfest, CCP would not look kindly upon him. 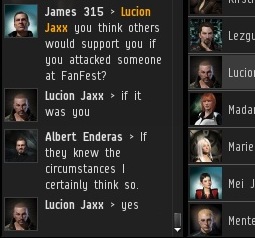 Unfortunately, there was a difference of opinion as to whether or not CCP would approve acts of physical violence, given the fact that I had bumped his hulk out of mining range. 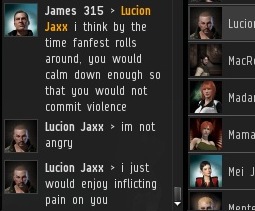 The two bumps exerted upon Lucion's hulk left deep scars on his psyche. Despite what he said, I still believe time heals all wounds. Once he deals with his issues and pays me my 10 million isk, Lucion will make a fine addition to the New Order.
Posted by MinerBumping at 01:51