I have often said that I generally accept all private convo requests because I am interested in advancing the dialogue and fostering development in the EVE community. A few days ago, I returned to the Kamio system to refresh my secure containers and get caught up with the people in that system. I was interrupted by a number of requests for private convos. 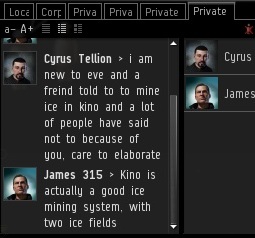 EVE newcomer Cyrus Tellion needed some information about what I do in Kino, and I assured him it was an excellent mining location. Not only does it have two ice fields, it has the New Halaima Code of Conduct. 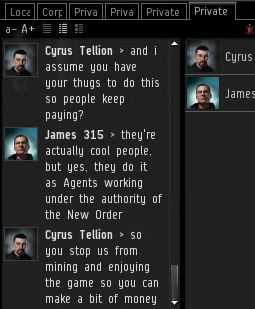 Sadly, Cyrus had an extremely poor attitude about the Code and our enforcement procedures. I am not a mafia boss. I am like the government agency that kicks the mob out of the neighborhood so kids can play in safety. 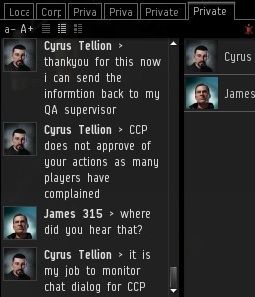 The conversation took a disturbing turn when Cyrus claimed to work for CCP, and he threatened to shut the New Order down. 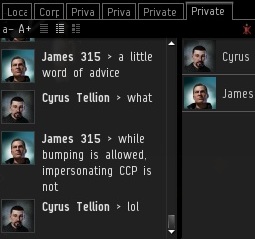 I instinctively recognized that CCP would have nothing to do with such deceptive tactics, so I laid a hard truth on Cyrus. 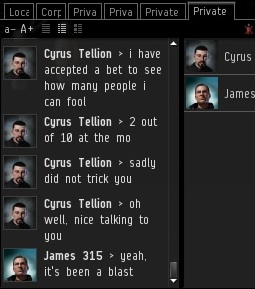 It's sad to witness the depths to which our enemies, in their desperation, will sink. However, I declined to report the offender. It is my belief that the EVE community can police itself, and I handle such matters in my own way.
Posted by MinerBumping at 16:08