Miners Turning Against Each Other?

The story of our time, the story of the New Order's liberation of all highsec, is an elegant tapestry. There are many threads in this tapestry, all woven together in beautiful fashion. Tonight I present a report forming a continuation of two threads we have already seen. Don't miss a post!

Earlier this week, we learned of Neltharak Idrissil, an Agent of the New Order who has been bringing justice and enlightenment to the ore miners of Isinokka. If you didn't read that post, you can get caught up here.

I recently spoke with our Agent and got caught up on his latest activities. He has been successful in collecting mining fees from the Isinokka miners, all in the name of the New Order. But there's a twist, as he sweetened the offer of 10 million for positive standings in an interesting manner: 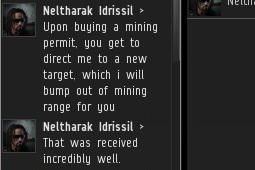 Sound familiar? That's right, back in Kino, a miner had propositioned me for a similar deal, and I wrote about it in this post. But here's the thing: Neltharak informed me of what he had done before I disclosed the Kino incident. The two events were entirely independent. This intrigued me. Neltharak sent me the log of his encounter with one of the Isinokka miners. The conversation began as soon as he bumped the miner. (I, too, have found that bumping miners is an excellent way to break the ice.)

Once the pleasantries were out of the way, Neltharak wasted no time in getting to the heart of the matter.

As is sometimes the case, the miner needed to be bumped to prevent a hasty end to the conversation. Neltharak gave the miner a brief rundown on the New Order and made the offer.

For reasons unknown, the miner wanted to inflict bumping on another target, something he was interested in even more than purchasing a mining permit. It is possible that highsec miners hate each other more than the rest of EVE hates them? It's certainly food for thought.

Neltharak, who hails from TEST alliance's Enlightened Industries, also created a corporation specifically for the purpose of wardeccing those who defy the New Order. 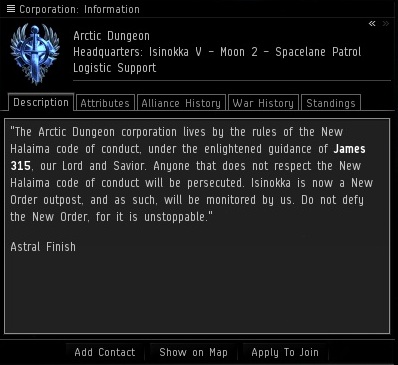 In the previous post about Isinokka, we took a look at the geography of northern Lonetrek. I didn't pass up the opportunity to ask Neltharak for additional intel on that area. This will be useful to us, since we plan to bring all highsec systems under our protection--and northern Lonetrek probably sooner than most. 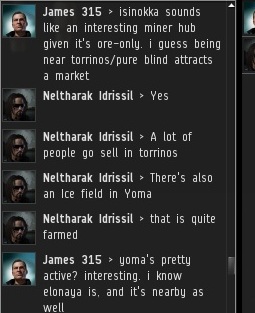 It seems he is already gaining a reputation in Isinokka for his good deeds. Remember the original EVE-O thread where I declared my takeover of Halaima, which is still in the Sell Orders subforum (for some reason)? Here's the most recent reply:

The advantage of being on the side of progress: We're always on the march.
Posted by MinerBumping at 01:46