I was there. Kino local was rocked by one of the worst miner meltdowns I have witnessed in my entire bumping career. So furious was the deluge of miner tears that the post must be split into parts. In the future, I will explain the context and recount the events that led up to the meltdown, and what happened after the events of this post. Consider this a preview. Now let's dive right in and find how what happens when highsec miners stop being AFK... and start getting real. Reader discretion is advised. 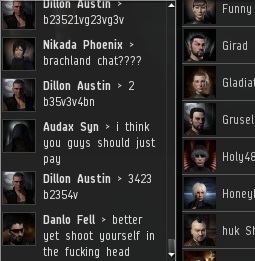 We begin in medias res. Dillon Austin, a highsec miner and self-proclaimed enemy of the New Order, has lost all reason, and begins spamming local with random letters and numbers. Danlo Fell, a miner with a political stance similar to Dillon's, makes his own feelings known. 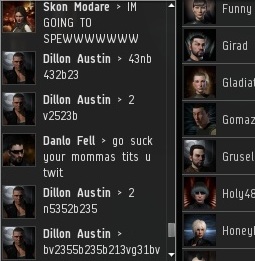 What has driven these "peaceful" miners to such a state? 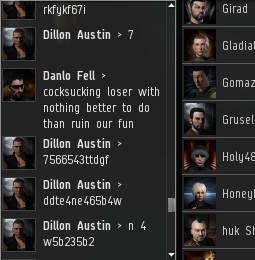 The two visions of highsec set in contrast: The peace and civilization of the New Order, and the barbarism of the rebels. 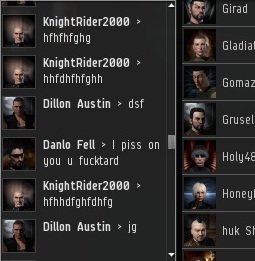 KnightRider2000, another highsec miner who styles himself a leader of the opposition, also gives in to madness. 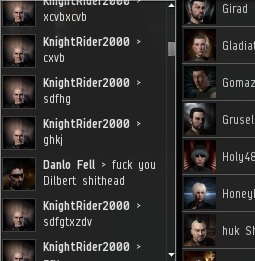 Danlo finally articulates his feelings in a way that provides a clue: He's angry with Agent Dilbert Jenkins. But why? 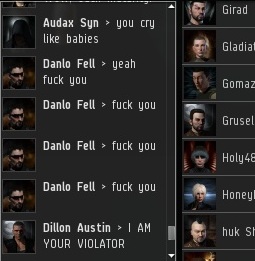 Dillon regains his speech. He offers an ecstatic confession of his violations of the Code. 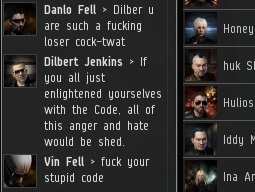 Dilbert offers the miners a way out. They do not take it. Yet another highsec miner, Vin Fell, joins the fray. 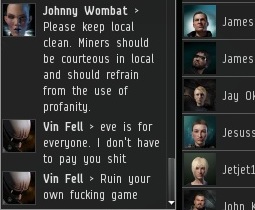 Agent Johnny Wombat is on hand to quote the Code provision against profanity in local. But it is of no use.

In reckless disregard of the Code provision against petitions, Vin claims to take the high road.

Agent Steve the Pirate is no stranger to salty language, but even he is taken aback by these swarthy dogs. 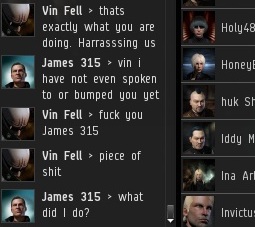 At last, I must speak. Vin's outburst came out of nowhere; as soon as he entered local, the first thing he did was lose his marbles. What was the cause of this system-wide meltdown--and could the New Order regain control before all were drawn into the vortex of madness?
Posted by MinerBumping at 17:55