Tears of the Day: The Good Name of Eno Bray

With our great empire now sprawling across the galaxy, I cannot always be there to watch, with my own eyes, the destiny of highsec unfold. I must rely on my Agents to serve as my eyes and ears. So far, they have proven very useful.

Highsec ice miner Eno Bray confided his extreme disapproval of the Saviour of Highsec to his fellow dissidents. (Here's a link to the post he's referring to.)

Though consumed by hatred, Eno decided not to let it show in public. He became convinced that the New Order runs on tears the same way an army marches on its stomach. The only solution was to starve the beast. 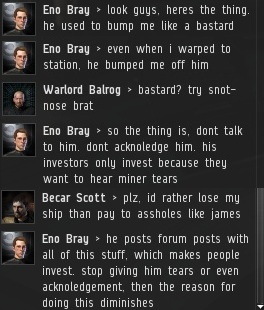 Or failing that, to take extreme measures.

Eno soon had an opportunity to test his theory when Kino was visited by two Agents of the New Order, Mallak Azaria and Dilbert Jenkins. 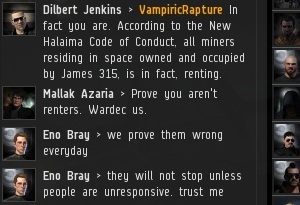 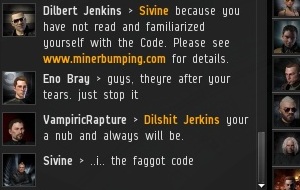 Eno urged his fellow miners to hold fast, depriving the bumpers of tears.

Yet Eno couldn't resist giving voice to his conspiracy theory. And then, it was Eno himself who was subjected to bumping. Time to show off those nerves of steel. 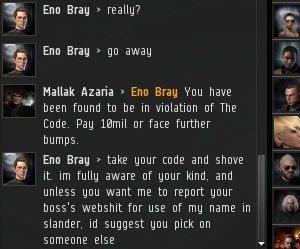 The pressure was too great. Eno switched tactics. 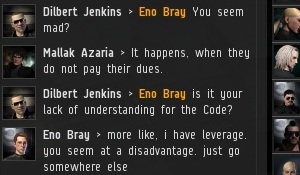 Eno was about to reveal his trump card. 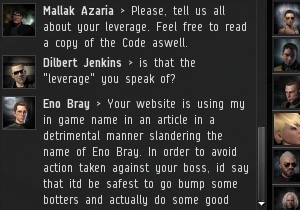 Eno's space lawyering was unveiled. Could the Agents stand against such power? 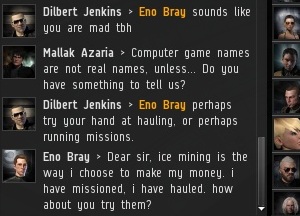 Better luck next time.
Posted by MinerBumping at 01:44