Night of the Four Bumpers

As we survey the wilds of highsec, we see a lot of miners and not too many bumpers. Surely, it must be one goal of the New Order to tip that ratio in our direction. Luckily, the New Order territories act as a magnet to draw in bumpers from all over. A few days ago, the Kino system became a nexus of bumping activity. 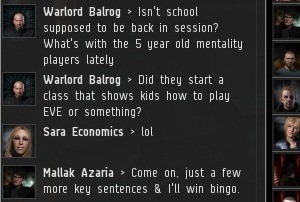 It began with noted shareholder Mallak Azaria, who decided to treat himself to a leisurely game of Miner Bingo. 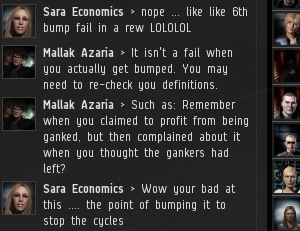 Present was Sara Economics, a carebear fixture in Kino with an impressive rap sheet. You may recall the time she petitioned to have me permabanned from EVE, or when she joked that I might commit suicide in real life, or when she annoyed a fellow Kino miner enough that he hired me to bump her. Sara was up to her usual tricks.

Suddenly, another bumper appeared! 'Twas Gorav Jenkins, the bumper whom the Kino miners accidentally helped recruit for the New Order.

The two bumpers were hard at work in the ice fields, both equipped with the finest in bumping technology.

A helpful Agent notified me that Kino was nearing critical mass for a proper bump-a-thon, and I was on my way in a jiffy. 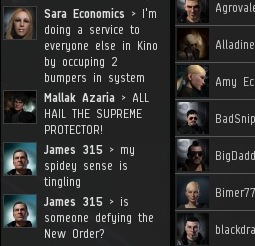 If that weren't enough, a fourth bumper soon arrived: The previously unknown Dilbert Jenkins. Dilbert was only a few days old, but already prepared with his own stabber. 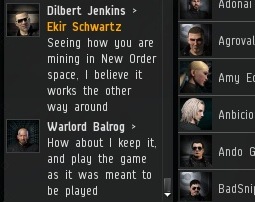 It occurred to me to take a screenshot to commemorate the occasion, but by then Gorav had already left. 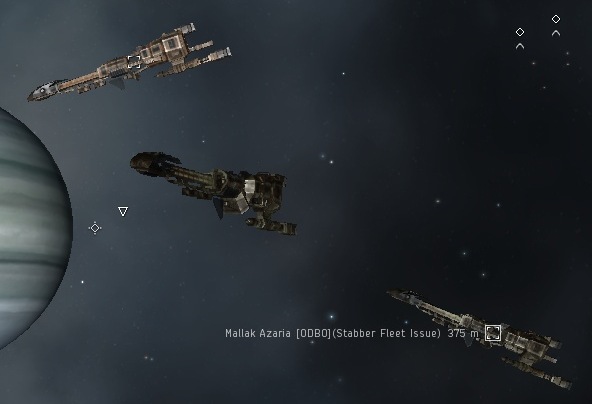 After I departed, the remaining bumpers helped keep Kino in the spirit of things. 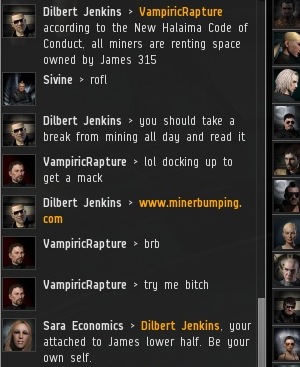 Then another Kino miner entered the system, who was horrified by what he saw.

...The long-suffering Eno Bray. But that is a tale for another day.
Posted by MinerBumping at 01:50