What's the Deal with My Bounty?

While I'm out bumping miners, people often make comments about the 106 million isk bounty on my head, and how much they would like to earn it. I always respond in pretty much the same way: I remind them of my invincibility and tell them to put away their silly dreams of collecting the bounty. After all, it's hard to pod someone when you can't kill the ship they're flying. But where did the bounty come from, and why is it exactly 106 million isk? 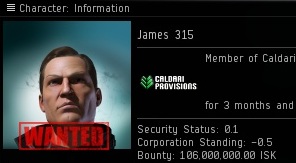 (Looking at it now, I can see the "wanted" stamp makes my portrait look even more off-center, but I couldn't be bothered with such superficial things. It's what a man says and does that tells you what kind of person he is, not how he looks.)

The bounty was placed on me back in October 2011. After quitting EVE for the third or fourth time, I found myself back in the game. My interest was piqued by reading of the Goons' infamous Gallente ice interdiction campaign, in which they suicide ganked a lot of highsec miners. For old times' sake I decided to come back and kill a few miners, just to see how it felt.

I went to Arvasaras, a 0.5 security system near Jita with an ice field. After I killed a few miners, they started getting mad at me. That's when the bounty happened. It actually had nothing to do with bumping miners at all--in fact, at that point in my EVE career I had never bumped a miner before.

Out of curiosity, I decided to go back and run a search of my chatlogs to see if I could find the day the bounty was placed. It was October 21, 2011.


Leopold the Belgian > nice bounty james
James 315 > /emote shrugs
James 315 > I don't have implants and my clone doesn't cost much
Leopold the Belgian > shrugging is often a way to show aloofness while a person is in great stress
Mac Arkhaos > lol the hunter has become the hunted how funny
James 315 > Hunting a suicide ganker is a little redundant, my ships are meant to explode =P
Shay Starlighter > we need to let all the alliances know that there has been a bounty placed on him lol

The bounty started small, with just 10 million isk. But as soon as the Arvasaras miners saw that a bounty was placed on me, they started bidding it up, little by little.


spams Rapose > i just added 15mil to his bounty
James 315 > It's your bounty money to waste. You can shuffle the isk amongst yourselves and say you podded me, what's the difference?
Gwenevier Xaviar > he won't stalk this belt now LOL
Mac Arkhaos > 65 mil now damn
Mac Arkhaos > wow that bounty has jumped from 10 mil to 70 mil in jsut 10 mins
Shay Starlighter > yeah hell probably get a goon from jita to come over here and pop him for the bounty

Within a day or so, the bounty climbed to 106 million. As a suicide ganker, I made myself vulnerable to podding every time I attacked a ship, because CONCORD would always arrive and blow up my ganking ship. I assumed one of the miners would eventually catch my pod, but it didn't happen.

Eventually my security status got low enough to threaten travel restrictions. I wanted to continue to be able to purchase new ships in Jita, so I returned to nullsec for some ninja ratting to get my security status back up. Then I briefly renewed my suicide ganking campaign in Arvasaras.

After my security status got down almost to 0 (still above the -2 where security restrictions begin), I got bored of ganking. I started bumping miners in Arvasaras, and later experimented with wardecs, followed by another round of bumping. During that time, no one was able to pod me; my bumping ships have never died.

Everyone knows the current bounty system is flawed. Podding carries ridiculous security status penalties in highsec, and someone with a high bounty can simply pod himself with an alt to collect his own bounty. However, I only have one account, and you can't run a trial account concurrently with your main. I have little interest in removing the bounty. I suspect it will remain there for some time, as a miner must first destroy my Invincible Stabber. Many have tried, all have failed.
Posted by MinerBumping at 01:19