Tears of the Day: Peace Negotiations

A corporation loyal to the New Order wardecced some disobedient miners who refused to follow the Code. In response, the miners' buddies in a corporation called Mjolinar Shipyards wardecced our heroes. Mjolinar's CEO, Ahkala Dheorin, blamed me for everything and opened up a private convo in which she demanded an explanation. Shortly afterward, the New Order loyalists successfully executed a number of deadly attacks against Ahkala herself, costing her a faction battleship and all her implants.

When I learned of this, I decided to open up peace talks with Ahkala. Given the level of damage inflicted upon her, I felt her surrender was imminent. Because I believe in mercy, I wanted to give Ahkala a way out of the war in which she could also save face in front of her troops. Given the fact that I had not encountered any of the miners involved, I was perfectly positioned to mediate the dispute; I had not fired a shot or even bumped anyone. Therefore, there was minimal risk of personal grudges or hostility getting in the way. 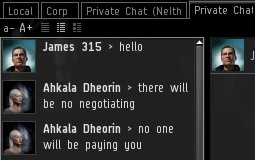 Ahkala didn't give me so much as a "hello" before she made her hard-line stance clear. 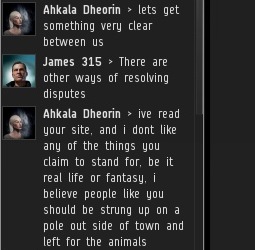 ...And there went the diplomacy rulebook right out the window, less than a minute into our talks. I assume she wanted to see me strung up on a pole and left for the animals in-game.

I still held out hope that her shoe-banging, "we will bury you" style of diplomacy was just a negotiating tactic. If she would let me know specifically what her grievances were, perhaps we could collaborate and find a mutually satisfactory answer to the crisis. 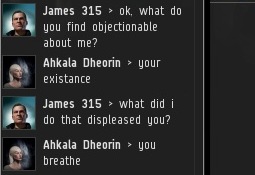 ...But the difference between our two positions was too great. 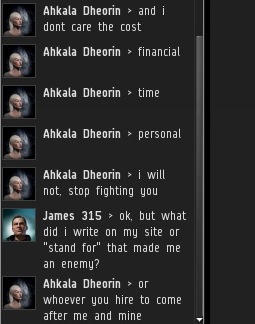 With that, Ahkala broke off all contact with me. Result of peace negotiations: Inconclusive.
Posted by MinerBumping at 02:07