Chalk up another victory for the all-seeing Agents of the New Order, who always keep me apprised of what the miners say and do when I'm not around. My extra sets of eyes and ears are rapidly delivering me intel from all across highsec. Today's report comes from Kino, which has become a hotbed of rebel activity. 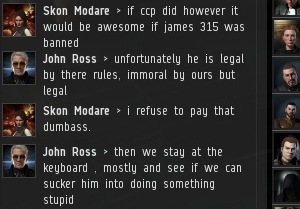 It began with some miners indulging in their usual fantasies about getting me banned from EVE. 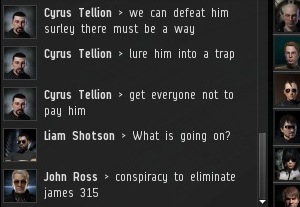 Before long, it was on, a full-fledged conspiracy to eliminate the Saviour of Highsec. 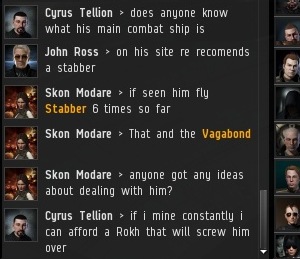 Cyrus Tellion took charge of the discussion. You may remember Cyrus from the time he broke the rules by impersonating a CCP employee. The conspirators were able to confirm that yes, the guy who's always talking about his Invincible Stabber does, in fact, fly a stabber (actually a stabber fleet issue, but close enough).

The Supreme Protector remains a popular topic of conversation in Kino, it would seem. In the local chat of a New Order system no less, the miners discussed my destruction as casually as if they were talking about what brand of coffee to buy. 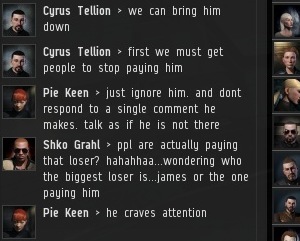 One of the popular theories of defeating me is based on the idea that I crave attention and that everyone can simply ignore me until I go away. For some reason that never seems to work out. 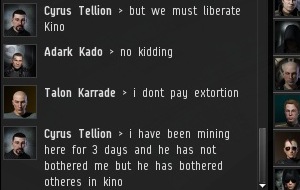 After some fuming, a new participant joined the conversation: ...None other than Ahkala Dheorin, whose recent losses to New Order forces include a faction battleship worth more than a billion isk. 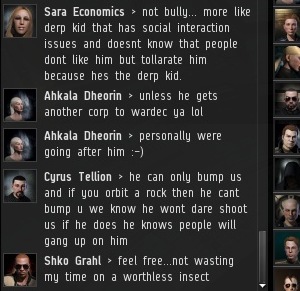 With Sara Economics joining in, local was turning into a veritable rogues gallery. All we're missing are the Joker and Catwoman here. 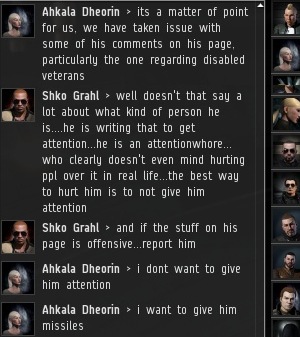 Ahkala took issue with the "disabled veterans" square on Miner Bingo, which does not actually say anything disparaging about disabled veterans. No mention of how she felt about the other 24 squares, so I guess they're okay.

Finally, the conversation circled back as it always does, to fantasies about banning me from EVE. I guess my Invincible Stabber can rest easy for another day.
Posted by MinerBumping at 02:35