Meet Me in Lowsec, or: What Ever Happened to 1v1 Duels?

In the days of old, when EVE pilots were bold, there was such a thing as "solo PvP". There's still solo PvP today, but it usually involves a scout alt, a booster alt, a falcon alt, etc. In the very beginning, there were even one-on-one duels. There are still 1v1 duels today, but they involve one pilot dueling another pilot and being ambushed by his 20 closest friends.

I still hold to the honour of the 1v1 duel, but it must be done according to the Code. An opponent must first prove his worth by passing any one of the three great trials: The Test of Wisdom, the Test of Valour, or the Test of Fortitude.

For some reason, people I bump often demand that I duel them according to their own terms, rather than the Code. To which I respond, "Who died and made you the Supreme Protector?" 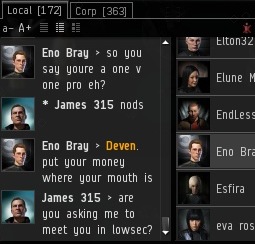 You will remember Eno Bray, a Code violator from Kino who recently earned the dubious distinction of being featured in a "Tears of the Day" post. He demanded I meet him in Deven, a lowsec system. I asked him a leading question because "meet me in lowsec" is a Miner Bingo line.

But there was a twist. Eno Bray didn't want me to duel him, he wanted me to duel his PvP alt in another system. I had not yet encountered this variation, so I was a bit confused at first. 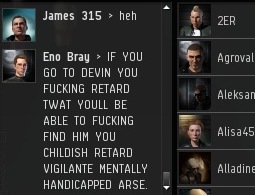 I gave him an appropriate response. 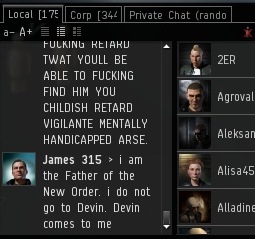 Eno continued to attempt to negotiate a 1v1 duel on behalf of his alt, but I tried to steer the conversation back toward a more reasonable course, one guided by the Code.

I tried to explain that in EVE, every player must defend himself. He cannot make threats with one character and cash the checks on an alt. Eno continued to rage, refusing to read the relevant section of the Code.


James 315 > filled with so much hate and anger...when you join the New Order, you will shed both
Eno Bray > Ive never met someone like you before. You should be in the looney bin
James 315 > every great man in history was accused of being crazy
Eno Bray > Like Hitler
Eno Bray > oh wait
Eno Bray > sorry i meant, Charles Manson
James 315 > in what possible way am i like either of those two?
Eno Bray > Discrimination towards miners?

Sadly, the conversation was derailed, ruining all hopes that we could organize a proper 1v1 that day.

Finally, Eno concluded that I was a mere troll, not a true warrior. I don't know where he got that idea, but he terminated the conversation. 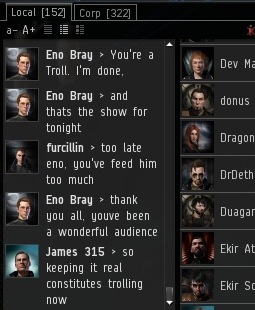 Eno vowed never again to respond to my "troll" antics. A bold, but misguided notion. Would it last?
Posted by MinerBumping at 02:04