Who You Gonna Call? Part 2

Previously, on MinerBumping... Highsec "mercenary" Taylor Who was mining ice in a Retriever when he was ganked by Agent Nu'adu. Taylor was too upset to listen to Nu'adu's lesson about the Code. Instead, Taylor escalated his complaint by demanding to speak to someone with the New Order's complaint department. Agent Pestario Vargas was on duty. 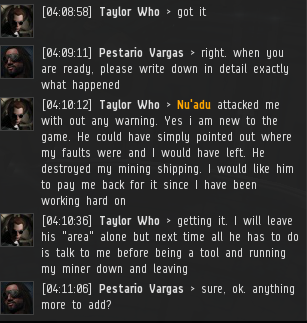 The concept of speaking to someone from the "complaint desk" had a calming effect on Taylor. He stowed away his profanity for the time being. However, Taylor's version of events was "Ripardized": He left out the part where he was mining without a permit and being disrespectful to an Agent. This is why, when we want the whole truth, we listen to MinerBumping and not carebears or their enablers. 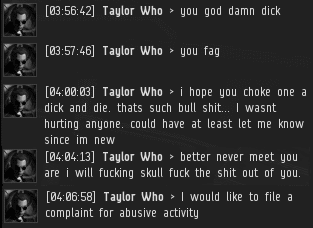 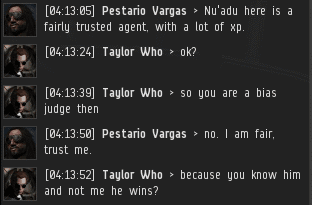 Pestario politely listened to Taylor's story. Then he gently pointed out that Nu'adu has a sterling reputation. Taylor immediately feared the outcome of his petition. What if the logs didn't show anything? 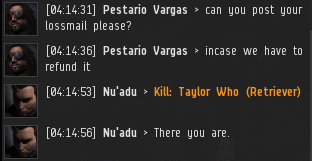 In search of evidence, Pestario requested the killmail. Nu'adu didn't hesitate to produce it--yet another sign of his innocence. 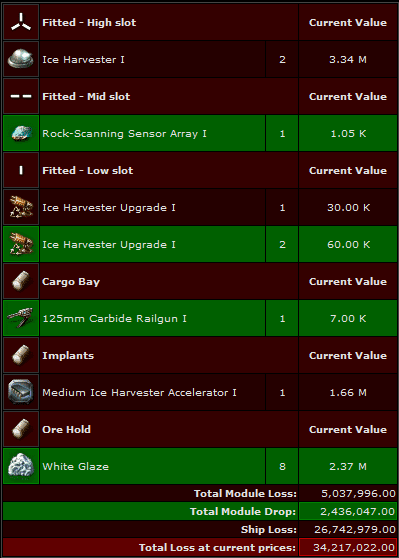 This is why I love having Agents. They're so good at what they do. Pestario put on his deerstalker and carefully examined the killmail.

Check the timestamps. Pestario instantly spotted something wrong. Caught by surprise, Taylor incriminated himself. He didn't have time to make up a story. 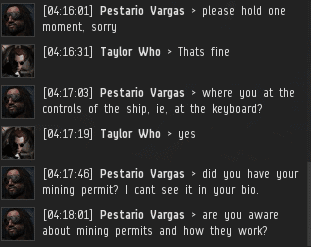 The noose was tightening. Not in a suicidal, EULA-violating kind of way, but in a clue-hunting way. The investigation shifted away from the ganker. Nu'adu was just a red herring in this mystery. Now Pestario focused his attention on Taylor Who. Could the petitioner--the very person who brought the case to light--be the one who was guilty? 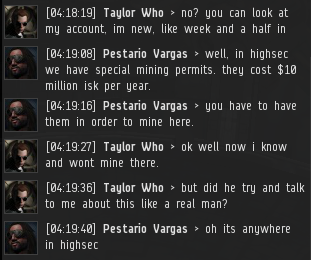 Taylor began grasping at straws and returned to his "real man" defense. It's interesting to note that even though Taylor was genuinely a new player, he still felt the need to exaggerate how new he was. He'd been playing for a bit less than a month, not a week and a half. Is this a thing now, where carebears all lie about their age to seem younger than they are? Such vanity. It doesn't take a new carebear long to be indoctrinated with the great myths of EVE. Taylor had never graced a nullsec stargate with his presence, yet he already bought into the myth that territorial control is all about in-game sovereignty. 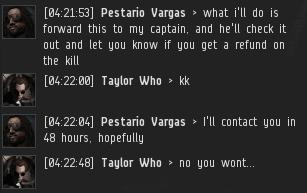 Taylor was satisfied when Pestario told him he would forward the matter to his captain. But when Pestario gave a 48 hour timetable, Taylor immediately changed his outlook. In less than a minute, he lost his faith in Pestario. 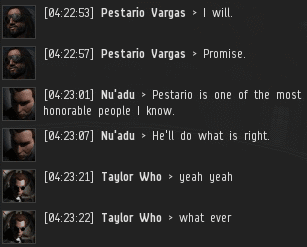 Like the loser of a Bonus Round, the ice-mining mercenary became a defeatist in his own cause. 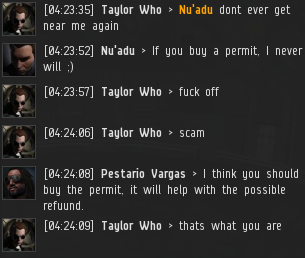 With no more faith left in the complaint department, Taylor uncorked the bottle on his profane vocabulary. A carebear's mask, no matter how carefully crafted, will always fall away, eventually, from his bot-aspirant face. His guard down, Taylor dropped the other shoe:

There it was. Taylor Who--the new player who had never heard about the New Order or the Code or Agents or James 315 or tank modules or any of it--showed his true colors. He admitted he'd heard about the New Order. What he heard wasn't flattering or true, but he had heard of us. Even the new miners know about the Code. The New Order's presence is too big to ignore, even for a bot-aspirant. They don't need a "warning" before they get ganked. They've already been warned. Carebears of highsec, the time for warnings is over. The time for payment has come.
Posted by MinerBumping at 22:55