Dean Age was salty immediately after being ganked. Would his saltiness level increase or decrease over time? 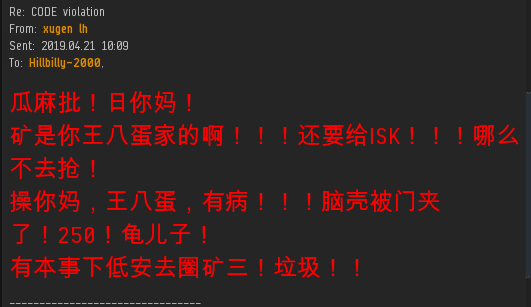 These days, the ability to translate the tears of Chinese miners is more important than ever. But Google Translate appears to be lacking:

I get the impression that something was lost in translation here.

Don't worry, though, highsec still has plenty of Russian miners.

"Fuck you, you fucking motherfucker! and shove your new order, yourself or the ass you suck"

Highsec carebears certainly have a distorted view of the EVE galaxy. They think Goonswarm Federation rules lowsec. A lot of these miners don't know anything about the world beyond the asteroid they're shooting.

If Cateron Shikkoken is waiting for CCP to release a dev blog that exonerates him of the crime of bot-aspirancy, he'd better not hold his breath. Our Agents always perform a full investigation before accusing miners of anything. 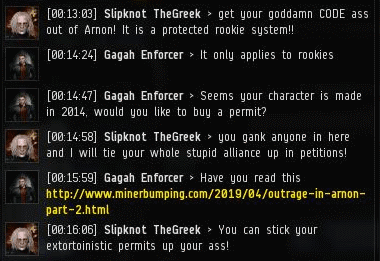 It seems the space lawyers are multiplying.

Click here for full-size version
In a nod to the New Order's founding, Agent Kalorned bumped a miner in Halaima for an extended period. It was worth the effort. The miner performed a detailed psychoanalysis of our Agent and sent it to him, free of charge.

Whenever Chaos Blackhawk interacts with one of our Agents, he tells them to drink bleach. He's quickly gaining a reputation as "the bleach guy".

I'm always baffled when a rebellious carebear accuses our Agents of "griefing" the miners. It's obvious from EVEmails like this one that the New Order spreads joy wherever it goes. We're whatever the opposite of a griefer is. 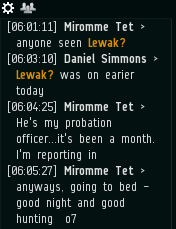 There are a lot of bad miners out there, but make no mistake--day by day, highsec is being reformed. It's glorious to behold.
Posted by MinerBumping at 18:01