No Justice, No Peace

Pop quiz, dear reader: See if you can guess whether this miner has been ganked: 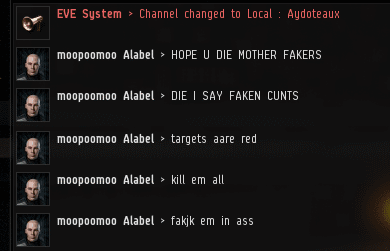 Actually, 'twas a trick question. moopoomoo Alabel was attacked, but his mining ship was not destroyed. 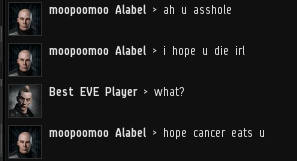 Agent Best EVE Player had attempted to kill moopoomoo for violating the Code, but the gank was not a success--or so it seemed. Miners can be extraordinarily salty even when they don't lose a ship. 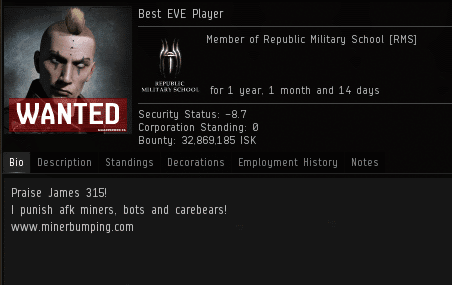 Our Agent knew that the Code could not fail. The CODE always wins, always! Therefore, moopoomoo's death must have been postponed for some greater purpose. Best EVE Player returned to the field of battle and resumed his fight for the betterment of highsec. 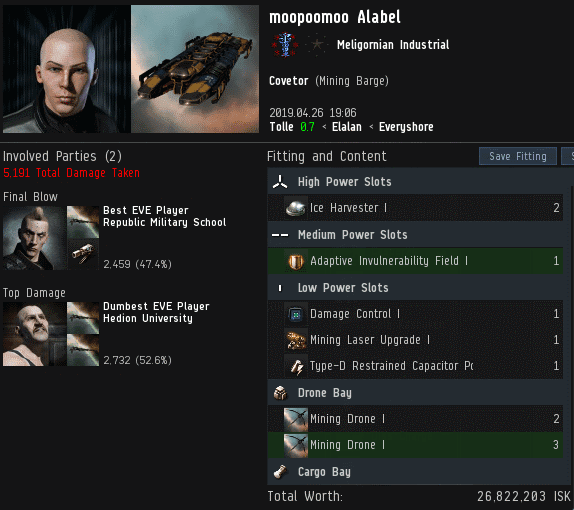 Victory! The miner's ship was completely destroyed. Agent Best braced himself. If moopoomoo could be so angry when his ship survived a gank attempt, what would happen when his ship was killed? 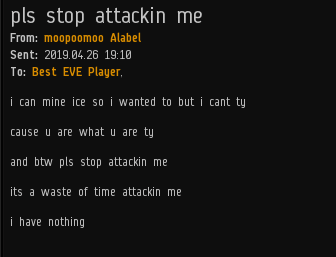 Our Agent read moopoomoo's EVEmail wish astonishment. Was this the same miner?

Clearly, this was a changed miner. Only the Code could have this sort of effect on someone.

The miner no longer spoke of wanting our Agent to die from cancer IRL. That was a huge improvement, as far as the miner's attitude was concerned. All he needed was a good gank, it seems. 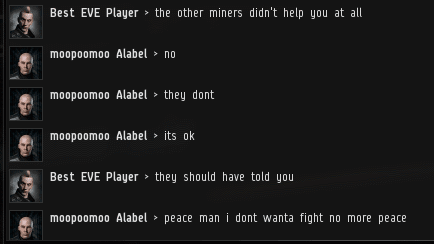 In spite of everything, Agent Best took pity on the carebear. He knew that moopoomoo's fellow miners had not prepared him for the reality of life in highsec. Not one bit. 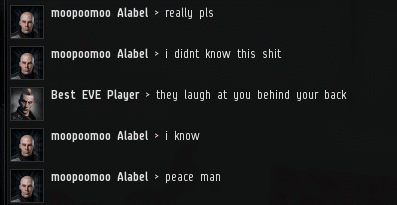 The miner couldn't wait to surrender. But without a mining permit, moopoomoo could not experience the lasting peace of the Code. Since he refused to pay, Agent Best couldn't help him further--except to offer him a future full of additional ganks. So moopoomoo went to the Anti-Gankers:

Miners, if you don't obey the Code, you will never know peace. No Code, no justice. No justice, no peace.
Posted by MinerBumping at 18:09