Previously, on MinerBumping... Some miners rant and rave when they lose a mining barge. That's to be expected, I suppose. But when Tom Catz lost his Retriever, he bombarded Agent Lewak with a seemingly endless series of ranting EVEmails.

Despite a dead barge and a bundle of wisdom courtesy of Agent Lewak, the miner was no closer to buying a permit. Tom simply couldn't understand what motivated the ganker.

Our Agent, of course, was totally open and transparent about why he did what he did. The New Order has no ulterior motives or hidden schemes. The Code can be downloaded and read by anyone--and it's available in ten different languages. 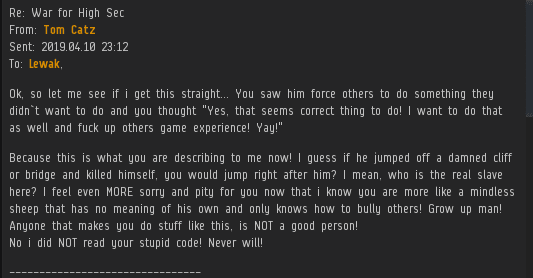 Tom's problem is that he wouldn't read the Code. No wonder he was so confused.

Lewak urged the miner to simply read the Code. It would be smooth sailing from there. 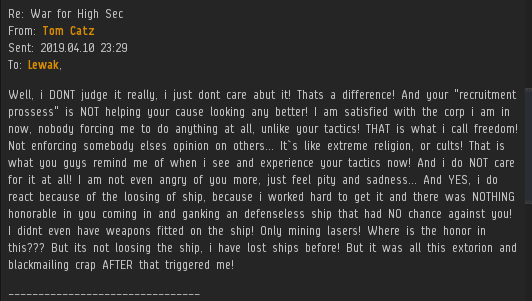 Alas, Tom preferred to experience one emotional meltdown after another. Looks like he's another one of those "relaxed" miners.

As it so often does, compassion filled Lewak's heart. But it was doubtful that the miner would appreciate it.

Tom confessed that he didn't care about anything but mining for the purpose of grinding isk. He was a bot-aspirant.

Yet even a hardened bot-aspirant can be rescued by the power of the Code. Tom could turn his life around. And if he didn't, he was 100% responsible for the consequences.

Though he hadn't quite left the "denial" and "anger" phases, Tom tried his hand at bargaining. He offered to leave Lewak alone in exchange for free rein to engage in illegal mining. (Try offering that kind of deal to any police officer you meet. I doubt you'll get many takers.)

Tom insisted that the two needed some way out of their stalemate. Rather than making a reasonable proposal (like offering to obey every provision of the Code), he asked Lewak to come up with something.

Agent Lewak dug deep: He was willing to sell the miner a permit for only 10 million isk. 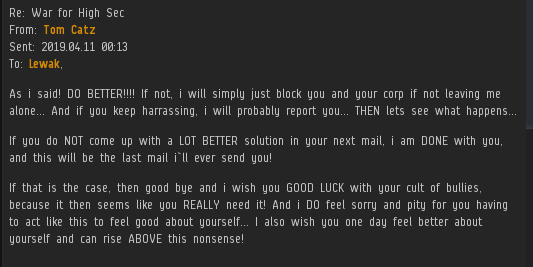 In an odd bit of negotiating, Tom made a unilateral offer to leave Lewak alone--something he'd previously suggested would require Lewak to do the same.

Unfortunately for Tom, the talks concluded with the miner continuing to be a target for Code enforcers everywhere in highsec. Our Agent had refused to compromise his principles. Another victory for the Code!
Posted by MinerBumping at 18:01