If I Tell Them To

When you're an Agent of the New Order, everyone has something to say about you. You'll hear a lot of cheers and a lot of jeers.

The jeers come from Goofuses.

MikhailGorbachev expressed his utter disdain for anyone who lived in highsec--despite living in highsec himself. Strangely, this is a common sentiment among highsec miners.

The miner encouraged Minx to leave highsec. Of course, his advice had nothing to do with his desire to avoid being ganked by our Agent. He simply wanted Minx to know nullsec is cool, that's all.

MikhailGorbachev couldn't stop talking about how great nullsec is and how everyone should go there. Minx suggested that the miner should accept his own invitation. Would the miner come up with a believable excuse for refusing?

Just then, Minx's aggression timer ran out, and she left the system to gank someone next door. However, the miner left an intriguing threat in local chat right before Minx jumped the gate. Our Agent reminded herself to ask the miner about it--if he was still in the system when she returned.

About twenty minutes later, Minx jumped back into the system. Sure enough, MikhailGorbachev was ready to pick up the conversation where it left off.

As it turned out, MikhailGorbachev was no ordinary highsec miner. This miner was connected. He had friends in Goonswarm Federation and Pandemic Legion. 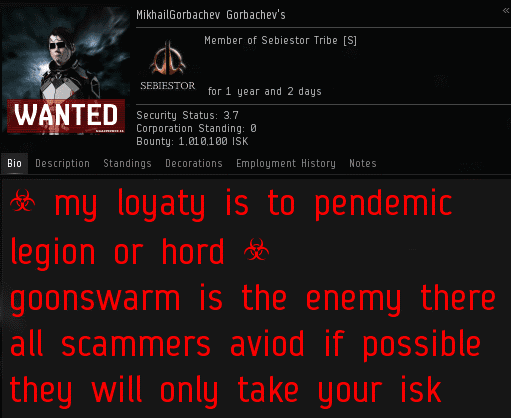 Judging by his bio, he favored his PL friends over his Goon friends.

Most of nullsec was at MikhailGorbachev's beck and call. This only added to Minx's questions about why the miner ever left nullsec to begin with. I mean, he was basically running the place.

MikhailGorbachev might have krabbed in nullsec once upon a time, but now he was just crabby. Minx made a point of following up with the miner by EVEmail.

MikhailGorbachev was still in a bad mood when he replied. Indeed, he was so enraged that one minute later, he did something rash. 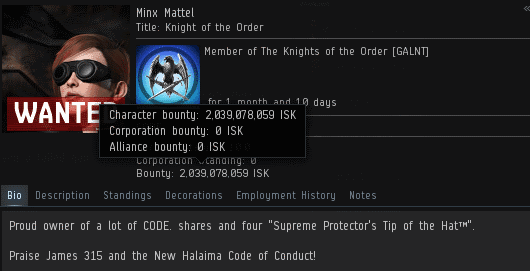 A billion isk bounty instead of a permit. I told you this guy was a Goofus.

Maybe nullsec is filled with cool people because all of the worst miners go back to highsec?
Posted by MinerBumping at 18:03