Previously, on MinerBumping... Under the influence of the Phantom Provision, highsec miner Alerianne deceived herself into believing she'd been unjustly ganked in violation of the Code. Agent Minx Mattel came to her rescue.

Alerianne asked an easy question and got a tough answer. Surely now she would see that she had fallen fall short of the Code's requirements?

Agent Minx reminded the miner not to be hysterical, which had an instant calming effect. (Protip: This technique doesn't work on everyone.)

Alerianne at last played the "new player" card. Why had it taken so long, you might wonder? Well, look at her killboard: 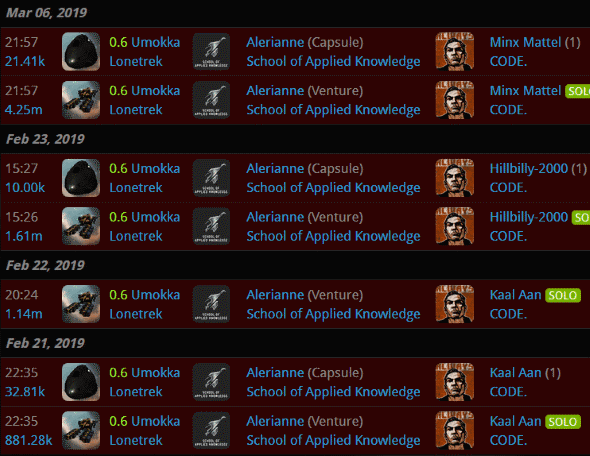 ...She had probably had a lot of experience with the ineffectiveness of the "newbie" excuse.

More confessions tumbled out of Alerianne's mouth. She admitted that she'd seen Minx's scout decloak prior to the gank.

Alerianne attempted to shift the blame in every direction. Of course, her slow reaction to the initial gank couldn't have been the issue, since her pod was also destroyed. There was a lot more to this than bad reflexes.

The miner didn't want to be "afraid". What she really meant is that she wanted to feel the absolute security of a 100% risk-free highsec. After all, our Agents lose ships constantly, but they are never afraid.

Bonus protip: It costs zero isk to remain at your keyboard while playing a computer game.

Our Agent marveled at the difference between the way she and Alerianne viewed the game. Minx wanted Alerianne to grow. But Alerianne thought "help" meant being handed everything and never having to overcome any obstacles.

Too often, highsec miners have a distorted view of the world and their place in it. Our Agents step in to provide the parenting that the miners' parents wouldn't or couldn't do properly.

Alerianne refused to acknowledge that she'd learned anything from her experience with Minx. Our Agent hoped that wasn't the case. Maybe time would show that something did sink in.

The miner logged off without so much as a "praise James". Her path to Code-compliance is far from complete.
Posted by MinerBumping at 18:00