Previously, on MinerBumping... Misguided carebear Tom Catz provoked Agent Lewak into ganking his Retriever by mining illegally in the Arnon system. Lewak did the miner a favor by explaining EVE to him via EVEmail. But Tom was outraged.

"Hold everything!" shouts the carebear apologist, "The miner was merely a new player trying to find his direction! Your Agents are going to bankrupt CCP and/or Pearl Abyss!" 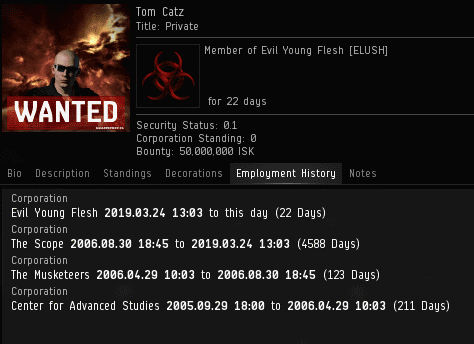 Though Tom belonged to corp that claimed to service "new players", his character was created in 2005. His recent return to the game is, frankly, suspicious. Regardless, Tom didn't need the corp's help to "find his direction". There is only one direction in EVE: the Code. 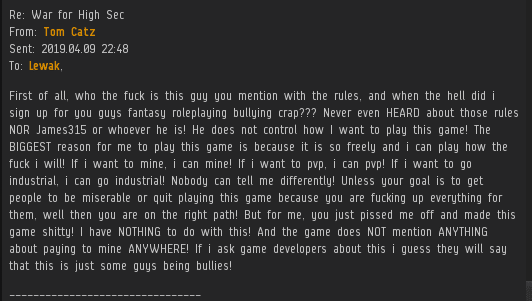 It is said that the first two stages of grief are denial and anger. Tom inhabited both.

Agent Lewak knew it would be difficult to guide this miner through the various stages of grief. Here's the thing, though: Agents of the New Order are really, really good at accomplishing difficult tasks. 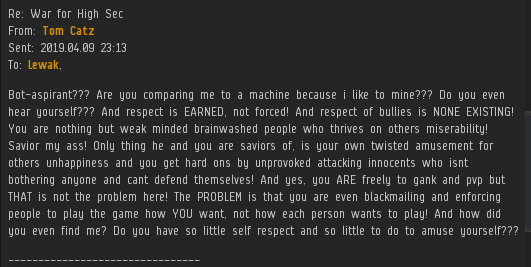 Our Agent sensed that Tom was deeply paranoid. The miner perceived Lewak--probably the only person who has spoken to him since 2005--as the enemy.

Although Agent Lewak was interested in fixing Tom's many psychological problems, the priority for now was getting the miner to pay him 10 million isk. After that, things would pretty much take care of themselves.

Tom was disgusted by Lewak. He accused our Agent of ruining the game. You know, the game Tom enjoyed so much that he took a 13-year break from it?

The miner had a bunch of meaningless buzzwords like "bullying" and "blackmail". Lewak had the name of the Saviour of Highsec. It wasn't a fair fight.

Tom vowed revenge. It wouldn't come quickly, of course. But the miner was patient. Very patient. At this rate, Tom might not put his plan into action for another few decades. 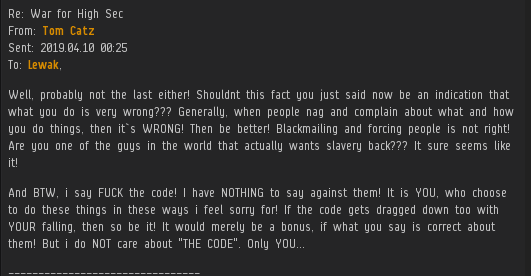 Carebears are creatures of contradictions. How else can you explain these two sentences being written side by side: "And BTW, i say FUCK the code! I have NOTHING to say against them!"

Lewak bravely stood up for what he believed in. Like the opponents of Nazism and slavery, the Agents of the New Order are on the right side of history.

Tom railed against Lewak for telling him what to do--while telling Lewak what to do.

Luckily, Lewak didn't take his orders from angry miners; Lewak followed the Code. Though Lewak was confident that Tom would buy a permit eventually, he noted that the miner still hadn't calmed down 24 hours after the gank. Nobody ever said Code enforcement was easy.