How Do I Fit My Stabber?

Over the past several days, I have been deluged by EVEmails asking me about my fittings and bumping techniques. To my great embarrassment, I have been forced to resort to sending copy-pasta responses. By popular demand, I'm addressing these questions in a post. This should be particularly useful to those of you who are new to bumping and interested in joining the New Order. I will be linking this post on the Become an Agent page for easy reference. 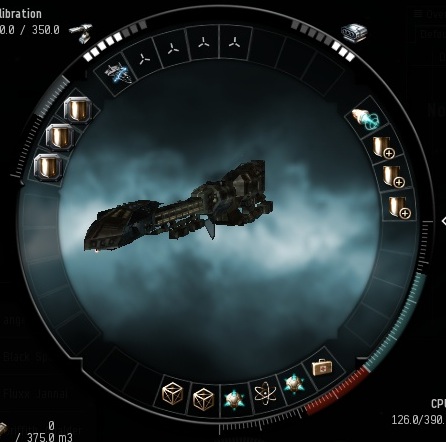 Let's start with the most common question. Pictured above is the schematic for my succeedfit Invincible Stabber. It's actually a Stabber Fleet Issue, which gives it a little extra. I would like to stress that a regular stabber is just fine for bumping, and there's no need to spend the extra isk on a SFI unless you really want to; the stabber is a great, affordable bumping ship. I'm including this only because so many people ask about my own fittings. Some of them just want to make an estimate of my EHP for future assassination attempts, but most are just curious for their own bumping.

I use a 10mn microwarpdrive and a combination of nanofibers and inertia stabs. As you can see, the rest is shield tank, and a cloak for AFK cloaking. I also use a power diagnostic system, which provides a little extra shields and capacitor (since I use my MWD a lot). A regular stabber fitting would be similar.

Some people like to fit an oversized 100mn MWD, but my preferred method is to use the 10mn and apply multiple bumps until the miner has been sent the desired distance. At a distance of at least 5km or so, fire up your MWD and approach the target. After you hit him, stop your ship and wait for him to travel another 5km or so from you, then hit again. Just a couple bumps will do the trick. Ice miners have a range of 10-12km, or roughly 17km with orca bonuses.

You don't need to ask my permission to join the New Order. If you believe in the Code, you are authorized to enforce it. Nor is it strictly necessary to only bump miners in current New Order territory; some prefer to go abroad. This is referred to as "ranging" or "going on a range". In doing so, you offer miners of other highsec systems a preview of the joy they'll eventually experience as we take all highsec.

How to enforce the Code? 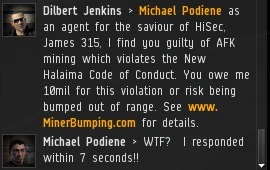 Pictured above is an Agent demanding 10 million isk from a miner who failed to adequately prove he was at his keyboard. The usual routine is as follows: Find a miner and ask him in local if he's AFK or botting. If he fails to respond, he is guilty. If he does respond, ask him for his 10 million isk mining fee. If he pays, he's good for 365 days. If he fails to pay, he's guilty of breaking the Code--just as if he were mining AFK. Paying the mining fee is extremely beneficial to the miners, so they have no excuse.

When a miner is in violation, it's time to bump. What you are doing should be announced in local so as to inform other miners and set a good example. In the above picture, you see an example of a copy-pasta notification suitable for use. My typical one is a bit shorter, "You have violated the Code. Pay 10M or risk bump. See www.minerbumping.com for details." It's a matter of preference.

Bumpers have informed me that linking the website in local as pictured above is particularly useful in obtaining compliance, since the miners understand you're part of an organized effort, rather than a one-off bumper who will be gone tomorrow. Using the "www" in front of the website address makes it an automatic link. While you are bumping one miner, the other miners will be reading about the Code. Also, mission-runners and random passersby in system will also be directed to the website, which is a powerful recruitment tool. Many an Agent first became aware of the New Order simply by noticing the message while they were en route to Jita.

There you have it! You are now fully authorized and equipped to advance the cause of civilization across highsec.
Posted by MinerBumping at 18:21

Email ThisBlogThis!Share to TwitterShare to FacebookShare to Pinterest
Labels: Business, Mechanics, The Code