I was minding my own business one day when I encountered a troubled gentleman named Mako5. 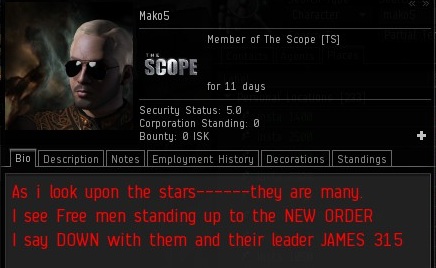 It's always tragic to see someone's entire bio dedicated to resistance against the New Order. Besides his hatred for the government of highsec, what does Mako5's bio tell us about the man? It seems to me that opposition to the New Order is very cult-like, in the way that it subsumes a rebel's individual identity. 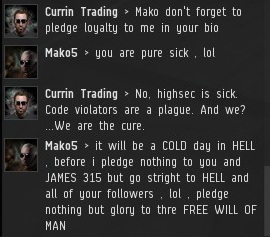 Mako5 seemed very confused, as if he thought we were the bad guys instead of the good guys. He was also mistaken about the nature of the free will of man. Why would free will prevent him from pledging loyalty to me? Wouldn't free will facilitate making that choice? 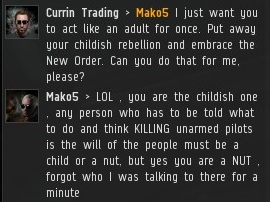 Spoiled children and rebellious teenagers are known for shirking their responsibilities and resisting what's best for them. When someone agrees to the EULA and logs on to EVE, it's time to put away childish things. Responsible adults know to follow rules and help kill those who violate them.

A classic fallacy of the resistance: They think they need to secure their rights by opposing our movement. This misconception of the nature of freedom has already been debunked. Democracy has a (surprisingly large) number of prerequisites, and someone needs to put into place the conditions necessary for its existence. Highsec has a right to be saved from the bots and bot-aspirants. Resisting the New Order is a violation of everyone else's democratic rights. 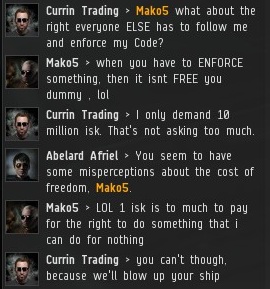 It's true what they say: Freedom isn't free. It costs ten million isk per mining character per year. As one of the founders of American democracy famously said, "Join, or die."
Posted by MinerBumping at 22:16