Impersonating an Officer of the Law

A few months ago, it came to my attention that rebels had begun efforts to impersonate me by creating characters with similar-looking names and portraits:

Can you spot the fake? They both are. My fame throughout highsec has also inspired various imitators who take the job of impersonation a bit less seriously:

Now the Knights of the Order have come under the eye of these shiftless rebels. Pictured below is the most elaborate of the most recent deceptions: 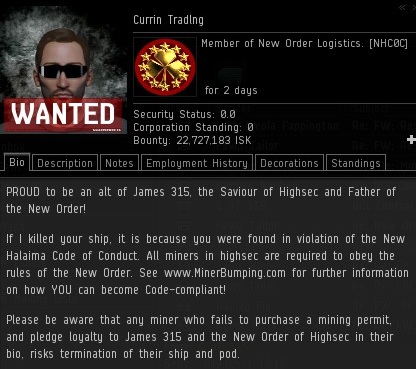 Note the use of the lower-case "L" in place of the "i" in Currin Trading. This false knight went so far as to copy Currin's bio and create a fake version of New Order Logistics. 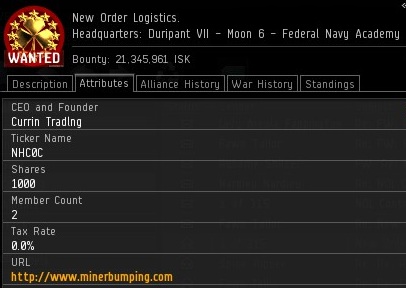 The true New Order Logistics does not contain a "." at the end. Although the perpetrator copied the corp logo and used a similar-looking corp ticker, he did not bother to found the corp in Halaima. I'm told that other Knights of the Order are being impersonated, as well.

Don't be fooled! If someone comes into your system claiming to be an Agent and tells you it's okay to violate the Code, you know you're dealing with a fake. A true Agent will never ask you to violate the Code.
Posted by MinerBumping at 20:28