A few days ago I wrote about the temper tantrum Gehb Ormand threw in response to the improvements we've made to highsec. A lot of the miners we encounter begin from the same starting point, a state of rebellion.

Meet Nate Kane. He was ardently opposed to the Code, particularly the proscription on AFK mining. 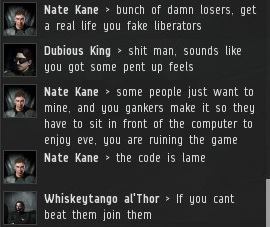 Nate sounded exactly like Gehb, even threatening to quit the game. But Whiskeytango al'Thor offered him an alternative: Why not pay? Whiskey had just recently purchased two permits for his own mining characters. 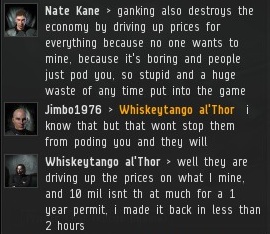 Whiskey and Nate illustrate an important contrast: Whiskey thought in terms of how to run his mining business, while Nate took the emotional approach.

Gehb himself was present for the conversation. Like all rebels, he failed to see the economic wisdom in Code-compliance. 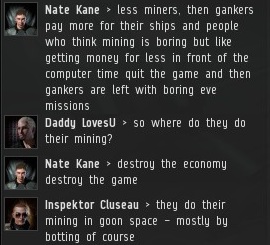 Highsec mining systems are an unhealthy environment for impressionable new players. They're filled with people like Inspektor Cluseau, who promote all kinds of poisonous beliefs.

Agent NoseCandy recognized Nate from a Mackinaw killmail. Was that the reason why he was so upset about the Code? Such a selfish prism through which to view a much broader philosophical picture. 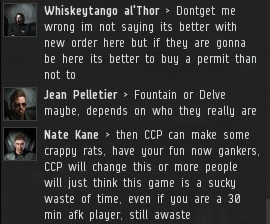 Nate was becoming radicalized. He feared that if CCP didn't allow miners a risk-free AFK money-machine, the game would be ruined. He thought bot-aspirancy was the only thing holding EVE together! 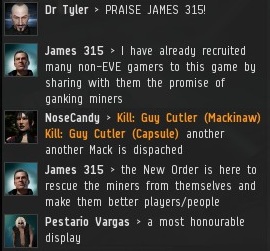 I sauntered into local like the rock star I am.

Nate continued to bitterly complain about the direction the New Order is taking EVE. I leapt into action with some words of encouragement: 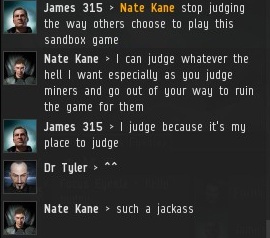 If the story ended here, you would think Nate ended up like Gehb Ormand. But the story has a happy ending. Our Agents worked tirelessly to educate and reeducate him, focusing on repairing his problematic thoughts and beliefs. 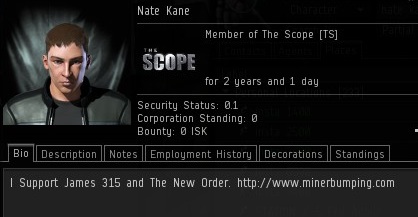 In the end, it was all worth it. Nate embraced the Code, purchased his very own mining permit, and embarked on a journey of self-improvement. You can almost see the happiness and optimism radiating from his character portrait. Thank goodness we have an Order that knows how to lift people up, even its former enemies!
Posted by MinerBumping at 23:26