Ever since the dawn of the New Order (and what a dawn it was), miners have been filing petitions against us. The petitions have all been denied--the New Order doesn't break any rules, after all--but that doesn't stop the petitions. 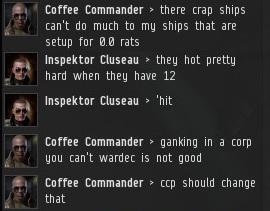 One of the most common complaints is that we bump and/or gank while in non-deccable NPC corps. To my surprise, this complaint continued after I joined a player corporation. Even after most gankers joined New Order Logistics or some other corp/alliance, many miners continued to complain that we were in NPC corps. Tear goggles?

Most carebears are completely disconnected from the rest of the game; they act as if it's a single-player MMO. But they still understand the power of complaining to CCP. It has delivered them many a gift over the years.

Thanks to years of nerfs, suicide ganking is at "historically low rates", according to CCP. The carebears are unsatisfied. They're astonished that CCP has only eliminated 99% of the ganking, not 100%. 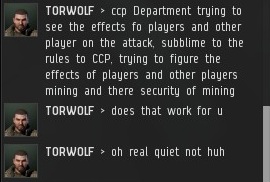 TORWOLF proves that even if one is incapable of expressing coherent thoughts, the message can still be sent loud and clear: Miners are entitled to peace. 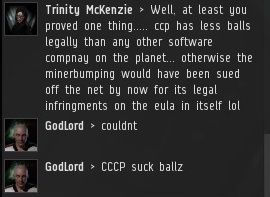 The miners frequently praise CCP for giving in to their complaints. The moment a new complaint arises, however, they turn against CCP. 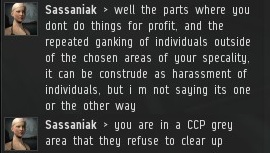 Somewhere along the way, miners have gotten the impression that highsec is supposed to be 100% safe, rather than just 99% safe. Anything that gets in the way of mining must therefore be subject to a new rule or fix coming down the pipeline. 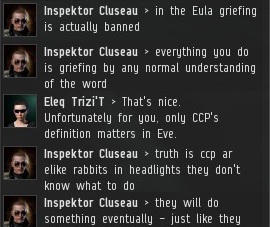 Any delay in giving the carebears 100% of what they want is met with the utmost frustration. Doesn't CCP know they've got important AFK mining to do?

Makalia articulates the credo of carebear "freedom": They are entitled to be free to do whatever they want--free from the disappointment and frustration of losing a ship. To preserve freedom, no one is allowed to do anything fun.

So confident are the carebears of their risk-free future, many think it has already happened. They are convinced that the inconveniences of player interaction have already been banned by CCP. The New Order is an educational institution: We teach the carebears otherwise.
Posted by MinerBumping at 20:52