Previously, on MinerBumping... Highsec fell in love with the fiery eccentricities of Moonsong Miner, whose unique way of expressing her anger about the New Order endeared her to all. 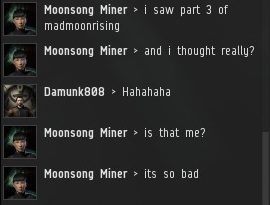 Though Moonsong herself had requested Part 3 of the "Mad Moon Rising" series, to rehabilitate her image after the first two parts, it ended up having the opposite effect. 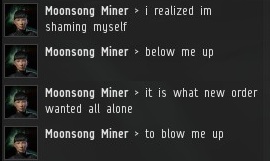 Moonsong began to contemplate a final chapter to the story: The death of Moonsong's heavily-tanked Mackinaw. 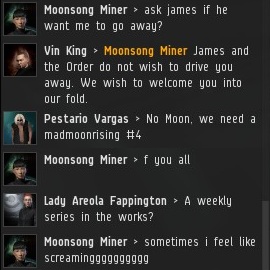 But her ship's EHP, combined with her charm, prevented the New Order from taking action against her. 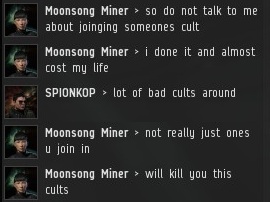 Once more, Moonsong declined repeated offers for her to join the New Order. 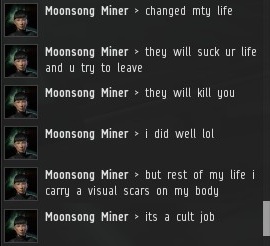 Moonsong didn't want to deal with our so-called "cult". The word "cult" has so many negative connotations--that's why I prefer to speak of the New Order "family". 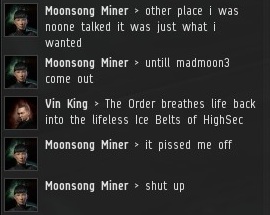 After the first two parts of the Mad Moon Rising series were published, Moonsong moved to a quiet little system where no one spoke. But MinerBumping is read in every corner of highsec, so she was quickly recognized. For some reason, Moonsong's answer to this problem was to go to Brapelille, the epicenter of New Order activity. 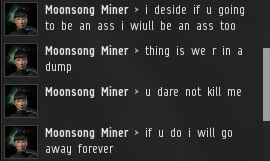 Again Moonsong challenged the brave Knights to attack her Mackinaw. But they did not.

As Agents of the New Order counseled Moonsong, rebel Inspektor Cluseau crashed the party with some unwelcome advice. 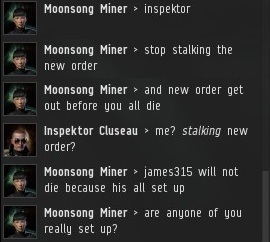 Moonsong warned everyone that dark days were ahead, and that only James 315 would survive. 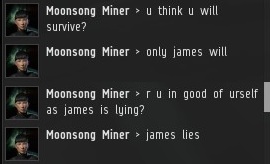 What she could be referring to, I have no idea. But I'm glad to hear of her confidence in my longevity. 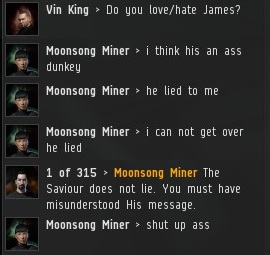 I've noticed that people's complaints about me are always generalized. No one can ever think of a specific instance in which I wronged them. I wonder what that means? 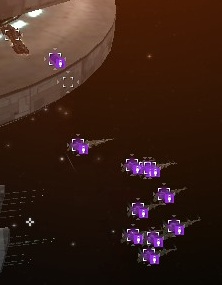 Suddenly, a cadre of Knights simultaneously undocked from the Brapelille HQ. Destination unknown. 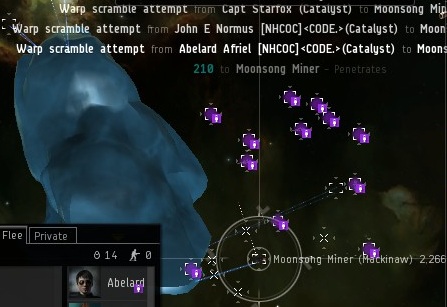 Zounds! Moonsong found herself surrounded, caught in the act of mining without a permit. Could she talk her way out of this one? Would her tank hold up? 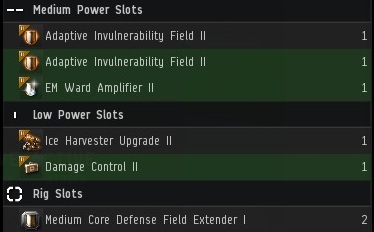 There is no tank strong enough to ward off a gang of determined Knights. Once their focus is set, they do not rest until they achieve their objective. 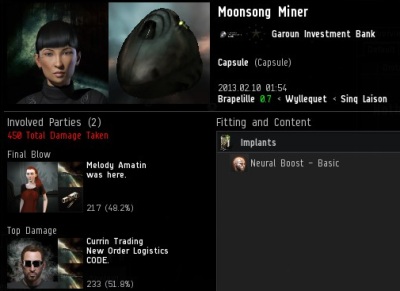 Agent Melody Amatin normally hogs the pod killmails for herself, but graciously let me in on Moonsong's pod. Would this death be the wake-up call Moonsong needed, and would she finally come to her senses?

To be continued...
Posted by MinerBumping at 21:57