Welcome back for yet another edition of the Grab Bag of miscellaneous carebear tears. Today's edition will focus on EVEmails. Miners often say strange things in local, but that's the heat of passion talking. The EVEmails they send are more calm and thoughtful. Let's take a look!

Talzar counts himself among the miners who truly believe it's against the EULA to shoot at spaceships in highsec. He claims to have been a beta tester for EVE, which is difficult to believe. But his character does go back to 2004. Impressive!

Talzar also sent a version of the EVEmail to me. To hear him tell it, it's amazing the Knights of the Order have gotten along without his help.

"My disgracement will always be with you" is one of the better curses I've heard lately.

It's EVEmails like these that make me regret the retirement of the "I wasn't AFK mining, I was just..." square from Miner Bingo.

Nic Motsu takes it to a new level. "I wasn't AFK mining, I was just AFK in a belt". Nice try--the Code provision against AFK mining has always been applied in cases where there is a clear and present danger of AFK mining. If you're in a mining ship in a belt, there is an imminent threat of mining, even if your lasers are off. Oh, and the name of James 315 and the Order are doing just fine, thank you.

Most EVEmails from angry miners are succinct. I suspect many of the rant-writers cool down and decide not to click send. Not so for Alexorion Rivularis...

Alexorion has been saved from a life of mining. But I do have to ask, where are the 1,000 other ganking crews in highsec? I've hardly seen any since the barge buff.

I get a lot of contact level notifications from people, but they usually don't take advantage of the ability to leave a note.

No matter how many times I tell these carebears that I'm not a monster, it never seems to sink in. 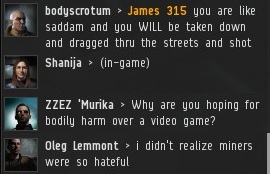 bodyscrotum has his history mixed up. Many dictators have been dragged through streets and shot, but Saddam wasn't one of them.

Miners are so prickly about the EULA, but they're prepared to let it slide when it comes to threats against bumpers and gankers.

Miners rarely buy into the notion that untanked miners deserve to be exploded, but they think EULA violations against their enemies are justified because bumpers and gankers "ask for it". Hypocrisy?

blood valentine knows how to spice up local. Can the situation be defused?