I received word from Agent Syds Sinclair about another successful mission--an undercover mission for the New Order. Syds joined a mining corp and brought a Raven along for extra protection.

Some miners thought it would be safe to mine in a 0.8 system in The Bleak Lands region. It would have been perfectly safe, had they the courage and honour to mine in compliance with the Code. But they did not, and they lost a billion isk in the blink of an eye. I wonder how long it takes to mine a billion isk worth of 0.8 ore?

After Syds won the 1v2 battle, the miners committed a serious breach of decorum by not offering congratulations. Is it just me, or do miners these days have no manners? I worry about the younger generations sometimes.

A piece of advice to all the miners out there: When a new member of your corporation opens fire and says "Hail James 315 and the New Order", it might be time to cut your mining op short. 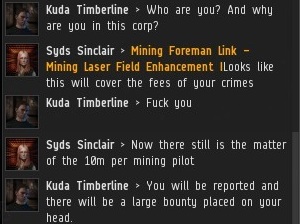 Kuda Timberline wasn't willing to accept any responsibility for the part he played in the loss of his Hulk. For whatever reason, he put all the blame on Syds, who by all accounts was merely enforcing the Code. 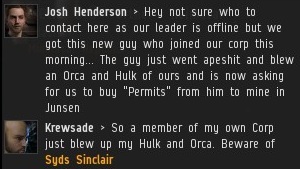 The fireworks woke up the other miners in the corp. In a rare dignity, the miners graced EVE with their presence at keyboard. 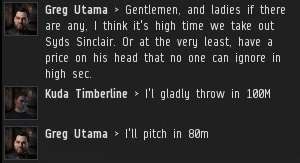 Greg Utama wasted no time in rushing to judgment. He vowed revenge against Syds, even though Syds had only just joined the corp. I thought carebears were supposed to support new players? 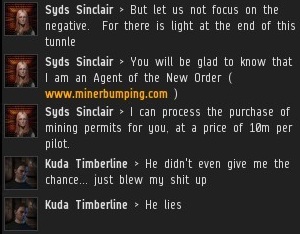 Syds informed the corp that they had absolutely nothing to fear: An Agent of the New Order was in their midst. Kuda denied any wrongdoing, but there was plenty of ore in his hold that said otherwise. 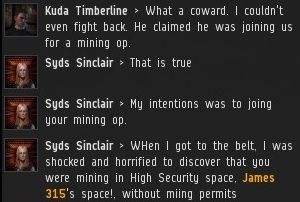 Syds didn't want to kill the miners, but they didn't leave any other option available.

Every awox is a potential lesson for the miners of highsec. You can't assume that everyone in your corp will be cool with you breaking the Code. If they catch you, they are authorized to kill you. 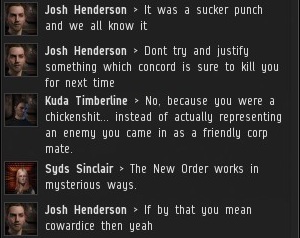 Agents of the New Order use every tool at their disposal to ensure 100% compliance in New Order territory. Mining without a permit may seem like a good idea, but in the long run, crime doesn't pay.
Posted by MinerBumping at 19:32