CCP's recent decision to allow miner bumping has brought renewed interest to the noble craft. There's been a bumping renaissance of sorts. Not everyone is happy about it. 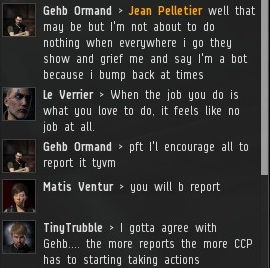 People are always worried about carebears quitting the game, but they're a persistent lot when they want to be. Despite CCP's public announcements on the subject and thousands of denied petitions, the miners still petition to ban bumping. 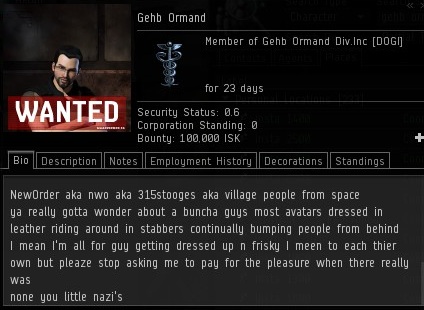 Meet Gehb Ormand. He would probably consider himself new to the game, having played only for a few months. The anti-Order bio tells you exactly what kind of player he is. We've seen his kind before. But today, he's going to let us delve a little deeper into the psyche of the carebear. 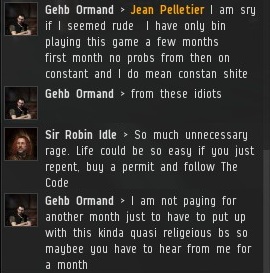 Like most carebears, Gehb is in a state of constant dissatisfaction. He's upset about the bumps, and he "threatens" to quit the game--though I kind of doubt he will. But why so angry? He explains:

Most carebears aren't as open and honest about their motives as Gehb. He shares the reason why he enjoys mining at a click per hour: It gives him a feeling of control. It's an escape from a world in which he doesn't have any power over his surroundings. 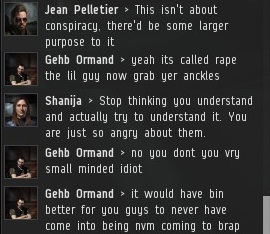 But EVE isn't for therapy; it's a competitive multiplayer MMO. And Gehb's misperception about the game has crashed violently into its reality, courtesy of the New Order. 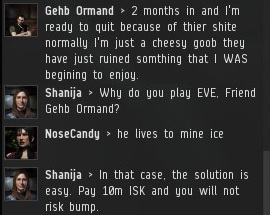 Shanija reveals another important clue about Gehb and the rest of the carebears. It stems from the fact that the New Order doesn't stop miners from mining in highsec. It simply charges them 10 million isk for a permit. Gehb has the cash. So why doesn't he pay and resume enjoying the game as before?

Gehb holds nothing back. Even though he understands that he could pay 10 million isk and continue mining, that would cut against the game's purpose, in his eyes. 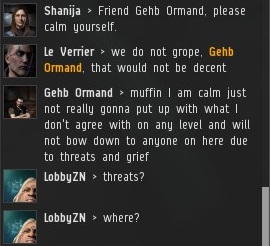 Gehb seeks a reality in which no one can impose anything on him, not even a trivial sum of isk. Nullsec and lowsec are out, obviously, since he could be shot at. In highsec, other players cannot affect you--or so he believed until his encounter with the New Order. 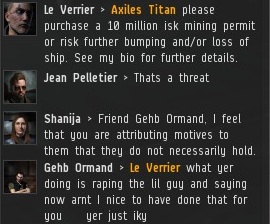 Non-carebears understand that in a multiplayer game, other players necessarily interact with each other. They affect each other, especially in EVE.

Gehb's vision of EVE cannot coexist with the real EVE, unless EVE is transformed either into a single-player game or a theme park. 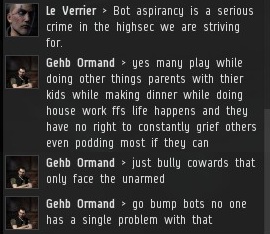 Sometimes I like to say that carebears prefer a "zero-player" game, one that doesn't even require the human element. Gehb would like EVE to run in the background while he makes dinner, does housework, or takes care of his children. He doesn't need to interact with EVE for the game to have value; the idea that he's steadily racking up spacebucks on his own terms is enough. It's not the graphics or gameplay that bring him to EVE, it's the illusion of uninterrupted progress. 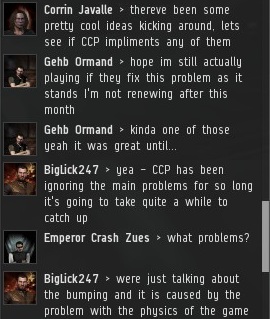 EVE is not a game to him--it's a therapeutic device. For Gehb, the EVE galaxy would be great if it weren't for all those other players. There are many Gehb Ormands out there. They cannot coexist with the rest of us in the sandbox, and they do not intend to--hence the petitions. They'll keep asking CCP to nerf the game until there's no "game" left. If they don't get what they want, eventually they'll quit. If those are the two choices, the choice makes itself: We must be in favor of the carebears quitting the game before they destroy it.
Posted by MinerBumping at 19:51