An octothorpe in the post title can only mean one thing: It's time for yet another edition of the Grab Bag of miscellaneous highsec miner tears! 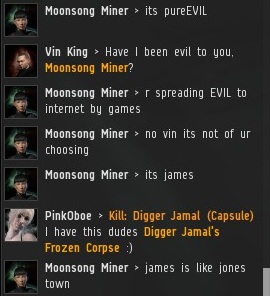 True story, before the New Order introduced evil to it, the internet was a clean, family-friendly place. 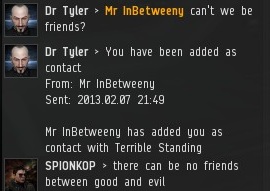 Long-time malcontent SPIONKOP draws a line in the sand. He doesn't specify which side represents evil, though. 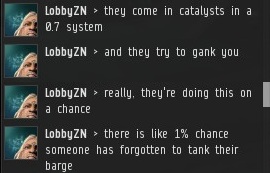 The New Order is surprisingly adept at finding the 1% of miners who "forgot" to tank their barge. 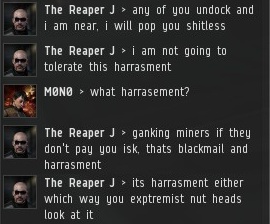 The Reaper J has finally had enough. But will CCP give in to his demands to ban the gankers? 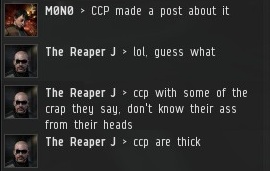 CCP always goes from hero to zero in the minds of carebears, once they learn it's not against the EULA to shoot spaceships in highsec. 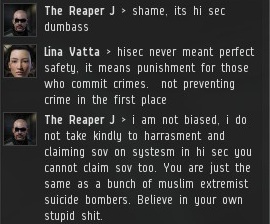 Why does it continue to bother so many people that we claim highsec? It's just like NPC null or lowsec. Concord squads roam highsec, true, but so do our Knights. Think outside the box. 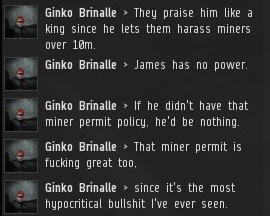 Ginko Brinalle says that I would be powerless, if not for the miner permit policy. Thank goodness for the Code!

Agent Wescro2 received a nastigram from a miner who questions our capitalist credentials. To be fair, I never claimed the New Order regime was capitalist, only that it was democratic. 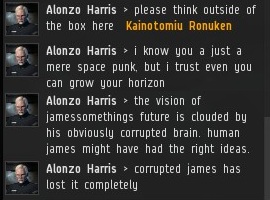 In recent days, miners are beginning to concede that some aspects of the Code are good and just. But they feel that the Code, and that I, have become corrupted by power. 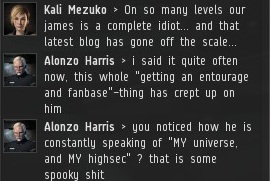 Whoever said power tends to corrupt never met me. I'm a man of the people, always.

Pods were made to be popped. How can that be griefing? I'm beginning to suspect the carebears have a poor vocabulary: They always confuse "griefing" and "fun".

A Knight is someone who is committed to completing the mission, no matter what the price. Of course they would suicide gank. It's the purest expression of dedication that I can think of. Also, honour. 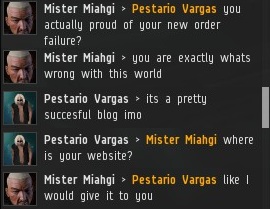 There are actually several anti-Order blogs out there, but they usually have short life spans. MinerBumping enjoys the advantage of being timeless. 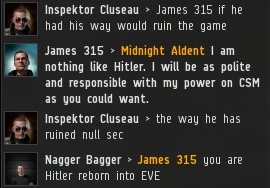 Inspektor Cluseau levied a baffling charge against me. When did I ever ruin nullsec? Then I remembered that Inspektor thinks I am the leader of the Goons and/or TEST. Now I just wonder when Goons and TEST ruined nullsec.
Posted by MinerBumping at 19:31