Previously, on MinerBumping... Scandal rocked the MinerBumping channel! Highsec mining corp CEO AMARR DontCare accused Agents from the PKing Since Pong alliance of unjustly terminating Aeryn Hanaya's Hulk. Incredibly, the miner in question did own a permit at the time. But said miner was also found guilty of multiple counts of violating the Code.


D34dly D34dly > hmmm. you sure you remember who should give the gf?
AMARR DontCare > both
AMARR DontCare > im not here to argue, i understand and thanks.
Larsulrik Napsterbane > "- Upon being suicide ganked, a miner should congratulate the ganker on his success. A "good fight" or "gf" in local is customary."
Larsulrik Napsterbane > Quoting the Code.... no mention of the miner being congratulated.

The mining corp CEO thought he knew the Code. And maybe he was familiar with some of its provisions. But the Agents of the New Order are scholars--their knowledge of the Code is on a completely different level.


Piz Caldera > AMARR DontCare [x] decadent implants [x] decadent drones [x] no greeting [x] no "gf" [x] no tank + fail fit [x] excessive use of mining crystals [x] probably afk or semi afk Your member is guilty!!
Lewak > yeah so many violatins
Lewak > you must educate your friends AMARR DontCare
Lewak > and teach them how to follow the code
AMARR DontCare > lol all good people all good i checked and i agree,

The ganked Hulk pilot had zero chance of getting her loss reimbursed. Faced with a mountain of evidence of Aeryn's guilt, her CEO... agreed?

With AMARR seemingly conceding every point and changing the subject, things began to return to normal in the MinerBumping channel. The crisis had passed. And maybe no one would have given the matter a second thought, except... 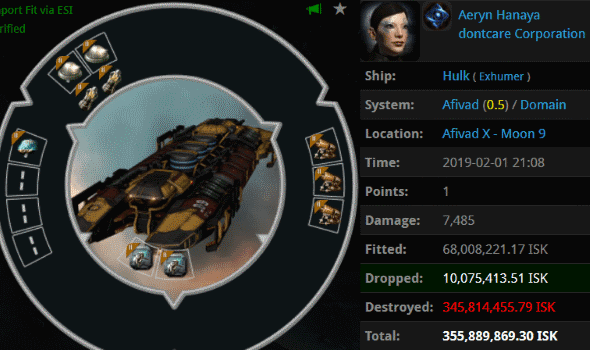 At the very moment that AMARR was supposed to be putting his house in order, his corp member suffered another mystifying loss to the same gankers. Would he apologize again, or would he make a heel turn?

AMARR chose to defend the indefensible. Incredibly, he even wanted Aeryn to get credit for not having decadent implants this time--because they had already been destroyed during the first gank!


D34dly D34dly > AMARR DontCare I never gank any permit holder (except when they are obviously breaking the Code).
AMARR DontCare > D34dly D34dly lol all good i like 8D
Aeryn Hanaya > ok for what did i was guilty the second time ?

Without warning, the controversy escalated further. Aeryn herself joined the MinerBumping channel and demanded an explanation for her latest death.


Lewak > everything the first time
Larsulrik Napsterbane > plus not having a valid permit.....
Aeryn Hanaya > afk ? augmented dromes ?
Aeryn Hanaya > nice and why di you not type anything in lockal as you need to ( from CODE)

In the eyes of the Agents, Aeryn was obviously guilty (again). The miner couldn't cover up her own crimes--so she accused our Agents of violating the Code, too.

Alas, it seemed that everyone in dontcare Corporation misread the Code in exactly the same way. They all saw the Phantom Provision.

Miners, this is why you hire a space lawyer to represent you.

Despite having lost all of her mining equipment, Aeryn was able to dig herself into a deeper hole.


SWAGGZENEGGER > are uy saying the code is stupid?
Lewak > miner, calm down
Aeryn Hanaya > and im on drugs to calm mysef
Lewak > enforcing the code can also be very calm and relaxing
Lewak > find some rets or vents in nice calm system

For whatever reason, Aeryn believed that EVE was all about mining. Our Agents knew better: EVE is all about the Code.

Though she owned a mining permit, Aeryn was behaving like a Goofus in front of the entire MinerBumping channel. Yet she was convinced that everyone else was a Code violator. What was the source of this madness?