For the past several years, the EVE community has been abuzz with a lot of interest and concern regarding new players. Interestingly, the number of new EVE players has steadily declined during that time. (The decline has occasionally been interrupted by exceptional events such as major nullsec wars or the introduction of free-to-play accounts.) Though the amount of new blood has waned over the years, there has been an opposite trend when it comes to people claiming "new player" status and special privileges. You can hardly throw a round of Antimatter Charge S into an asteroid belt without hitting someone who whines about being a "new returning player" or some other such nonsense.

In short, newbies have become more trendy even as they've become less common. On multiple occasions, I have written on the hypocrisy of crusty old carebears who wrap their bot-aspirancy in the flag of newbroism. Nevertheless, there is one legitimate point to be made about how to improve the lot of the newbies--that is, the "new player experience" (NPE). EVE lacks a suitable tutorial. This, too, is something I've often remarked upon--especially the need for Code-related content in the tutorial.

For reasons known only to the remaining CCP employees who work on EVE, the company has consistently failed to heed my recommendations on this matter. Apparently they don't care as much as I do about helping newbies and boosting CCP's revenues. However, the Code has never been about sitting around and waiting for CCP to do stuff. That's the carebear way. The Agents of the New Order are known for being proactive, innovative, and revolutionary. Unlike the carebears, we do not view ourselves as the victims of our circumstances. We seize the initiative and shape our own destinies--and everyone else's. Good for us!

With that in mind, I have taken the first step in improving the NPE by creating the definitive EVE Online New Player Guide. If you know someone who's considering joining EVE, send them here. If you're one of the countless MinerBumping readers who has never actually played EVE yet, this post is for you. And if you are a potential EVE player who went online to search for a new player guide, hopefully Google sent you here. We've promoted their translation service enough; they owe us.

Let's be honest: Starting EVE can be a daunting experience for a truly new player. I've told CCP to do something about the game's 1970s UI with its indistinct, monochrome icons. New player, none of your struggles can be blamed on me or my Agents. We're the people who want to help you. Trust us and no one else. 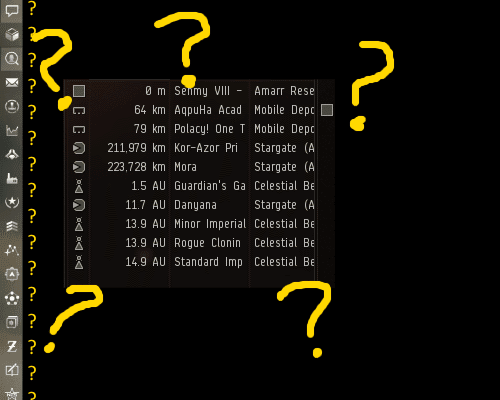 Lesson #1. Trust James 315 and the Agents of the New Order. You must assume everyone else you meet is lying to you. They don't want you to succeed, but we do.

How do you cut through the clutter and get to the heart of the game? Don't go alone. If you're trying to follow the tutorial and claw your way up the EVE "learning cliff", you'll get discouraged. You'll probably quit and find something else to do with your free time, just like the vast, vast majority of other people who tried EVE.

The only way you're likely to succeed is if you're invested in EVE before you even start trying to play. And even then, you'll need to listen to some good advice before you begin your journey. You don't learn to swim by being parachuted alone into the middle of the Pacific Ocean in the dead of night--a horrifying prospect. The good news is that there's a better option: Learn about EVE from MinerBumping.

Lesson #2. Don't learn how to play EVE by signing up to play EVE, or by playing EVE. First, spend time reading my website.

There is literally no reason why anyone should create an EVE account without first reading the Code. Of course, plenty of people are unaware of the Code before they start EVE. (And then our Agents introduce them to it--violently if necessary.) If you're reading this guide--if you're reading the Code--take comfort and satisfaction in knowing that you're already light years ahead of the other newbies, who, statistically, are almost certainly drowning in despair at this very moment.

You know how a lot of games have "achievements" that you unlock by performing some task? EVE has something like that, but naturally CCP botched its implementation. Never mind. The best content in EVE is the content that the players make for themselves.

Lesson #3. Unlock your first achievement by reading the Code!

You're well on your way.